This weathered steel-clad artist's studio by architect Christian Tonkin has an angled body that follows the slope of the hill, but one end projects out to frame views out over the rooftops of nearby Bregenz (+ slideshow).

Entitled a Studio for Drawing, Painting and Small Sculpture, the small building was designed by Christian Tonko to sit in the garden of a house, just outside the Austrian city. 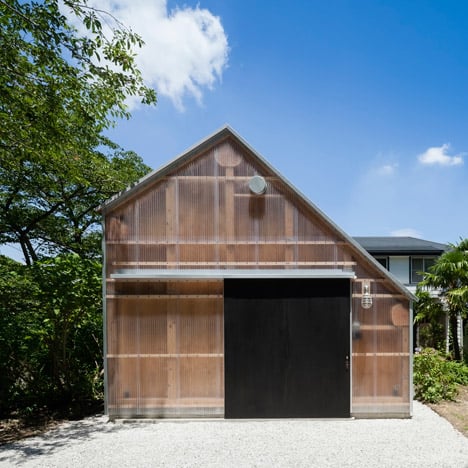 Its form fits to the sloping site to minimise its visual impact on the existing residence, but its northern end peels away from the earth, creating a gap between floor slab and hillside. This creates a shape of a tick.

Taking inspiration from the artist's analogue media, Tonko designed the studio based on the camera lucida – an optical device used as a drawing aid. The instrument uses light reflected through prisms or angled mirrors to project an image of an object onto a drawing surface.

Glazed walls inserted at either end of the step-shaped structure are intended to create an architectural version of this viewing device, framing scenes on the lower and upper part of the slope.

"On an underlying conceptual level, the design is inspired by an ancient optical device – the camera lucida," said the architect. "On the one hand it is very literally a bright chamber – constructed to achieve good light conditions that can be modulated to desired levels."

"At the same time the studio itself acts as an optical framing device, similar to the original function of the camera lucida," he added.

Screens can be pulled across a large pane of tilted glass on the south facade, giving the artist control over the brightness of the studio.

The body of the structure is made from cast concrete, which has been clad externally with panels of rusted steel. According to the architect, this material gives the building a weathered appearance that "contributes to the character of an analogue workshop".

Inside, the concrete has been left exposed. Untreated oak was used to frame the entrance and two smaller windows on the long facades.

A mezzanine level, accessed by a steel-framed staircase, is used as a workspace for sketches and small watercolour paintings, while the larger lower level accommodates canvases and sculptural works.

Photography is by Eduard Hueber.