Stockholm 2015: Scandinavian studio Claesson Koivisto Rune has designed a modular sofa system for public spaces that allows sitters to recharge their phones and laptops while resting their legs.

Claesson Koivisto Rune describes the Gate seating system for Swedish furniture brand Offecct as "a pit-stop while on the move, to recharge electric devices as well as weary feet". 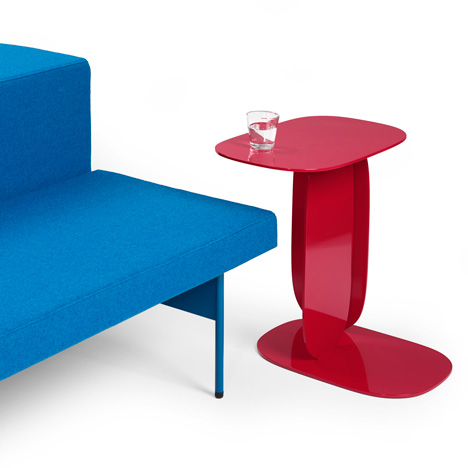 Designed for waiting spaces such as airports and lobbies, Gate's rectilinear form features a thin seat and a thick backrest.

"Gate is a sofa with rigorous proportions for people to sit and wait in," said studio co-founder Ola Rune. "We have worked in great detail with measures from a technical as well as from an emotional aspect."

Electric sockets are integrated onto the top, where the flat surface provides a place to charge laptops and other devices.

"This is a sofa for public spaces, where one can sit back to back with a stranger without invading on anyone's personal space," Rune added.

This makes it easy to reconfigure the elements for different environments, from simple sofa formats to zig-zagging arrangements for large spaces.

"We have carefully assessed how Gate can be built together in order to create smart solutions in any type of room," said Eero Koivisto.

"The design of Gate will also generate interesting typologies based on how the sofa sections are used in sequence. It is basically a sofa that speaks the same language as architects do."

Gate will launch at next week's Stockholm Furniture Fair, which begins on Tuesday. The studio is also set to show a series of huge cone-shaped lamps and side tables made from four thin sheets of metal at the trade event.

Another new product geared towards recharging electronic devices is a lamp by Industrial Facility that incorporates three USB ports into its base.