Two new structures have been erected by students amongst the trees of Hooke Park, England – a translucent pyramid suspended from the branches and a wooden burrow that nestles amongst the trunks (+ slideshow).

Five students from London's Architectural Association designed and built the wooden shelters for their first task on the AA Design & Make course, which takes place in a patch of woodland owned by the university in Dorset. 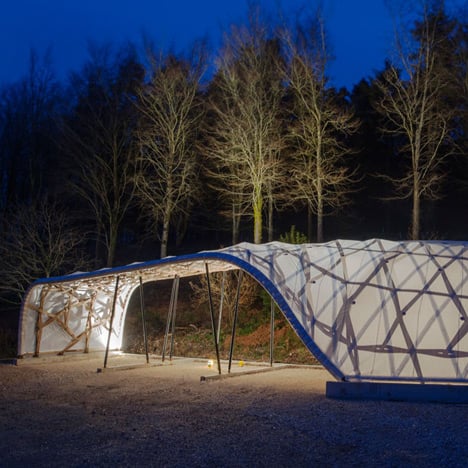 Led by tutors Toby Burgess and Martin Self, the two structures – named Tetrahedron and Big Fish in reference to their shapes – were created by students Zachary Mollica, Yang Yung-Chen, Mohaimeen Islam, Swetha Raju and Sahil Shah.

The brief was to "amplify existing features of the landscape" and to "test extremes of the reciprocation between designing and making".

Tetrahedron is a pyramid structure suspended between several surrounding trees at a seemingly awkward angle, directly above a large mound of earth.

Its frame was built using Douglas fir sourced from the surrounding woodland, while its walls are formed of a fabric membrane.

"The Tetrahedron geometry was chosen to act in contrast to the form of the mound, which local archaeologists speculate may contain an ancient burial chamber," said Martin Self, who is also the course director.

"Although appearing as heavy solid beams, the wooden structure is actually hollow, and contains tensioning cables and the fixings for the membranes," he told Dezeen.

The form of the second structure, the so-called Big Fish, was developed in response to the site topography. Clad with approximately 400 strips of larch and ash, it forms a hideaway on the forest floor, but also integrates an outdoor bench.

"The form of the Big Fish only emerged on site during its construction," said Self, whose previous projects with students have included a wooden cocoon and a faceted wooden workshop.

"A series of bendable kerfed timber ribs allowed an armature to the sculpted on site and locked into position," he added. "The final form emerged over five days in an ad-hoc process so as to maximise the inhabitants' experience of the terrain, trees, sunsets and views."

Photography is by students, apart from where otherwise indicated.