Menos é Mais Arquitectos and João Mendes Ribeiro slotted both light and dark structures among the stone buildings of an old warehouse complex to create this arts centre – one of 40 projects now on the shortlist for the Mies van der Rohe Award.

Located on São Miguel, the largest of the volcanic islands that make up Portugal's Azores archipelago, the Arquipélago Contemporary Arts Centre is as a museum of art and culture related to the heritage of its location. 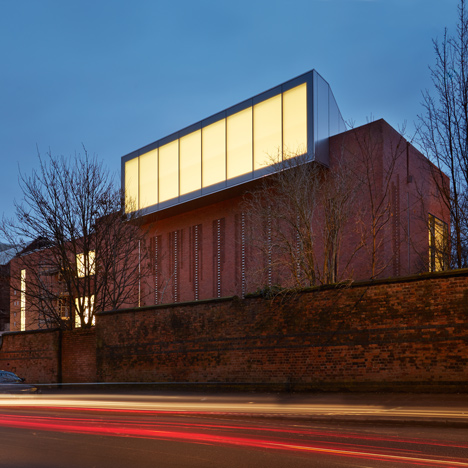 Porto studio Menos é Mais Arquitectos teamed up with Portuguese architect João Mendes Ribeiro to renovate the complex, which had formerly operated as an alcohol and tobacco factory.

The existing buildings feature rugged masonry walls built from volcanic stone. The architects added two large concrete buildings among these – one coated in a contrasting layer of bright white render, and another left unfinished to reveal a basalt aggregate.

The first occupies a formerly empty part of the site, while the other replaces an old dilapidated structure.

"The project of the Arquipélago does not exaggerate the differences between the old and the new buildings," explained the three architects involved – Francisco Vieira de Campos, Cristina Guedes and João Mendes Ribeiro.

"On the contrary, it seeks to unite the different scales and times of its parts throughout a pictorial manipulation of the form and materiality of the buildings – the existing constructions are marked by the volcanic stone masonry and the new buildings are characterised by an abstract form."

According to Vieira de Campos, Guedes and Mendes Ribeiro, the contrast in appearance will highlight the dialogue between the former factory and the new constructions, between which they have created a new public square.

A small courtyard adjacent to the road marks the entrance to the new buildings. The theme of light and shadow continues inside, where some spaces boast bare walls and tiled floors, while others have been painted white and feature wooden surfaces.

"The design is committed to the quality of what exists," said the architects. "New buildings are placed next to the existing ones in a serene manner – underlining the architectonical memory of a given period and the new addition."

The thickness of the concrete walls allow the buildings to integrate passive heating and cooling. A rainwater harvesting system was also added, meaning recycled water can be used for the bathrooms.

The Arquipélago Contemporary Arts Centre is one of 40 architecture projects nominated for the European Union's 2015 architecture prize – the Mies van der Rohe Award. Others include a woodland crematorium in Sweden and a spiky concert hall in Poland.