This ceiling-mounted installation by Italian architect Carlo Ratti uses motion tracking to direct personalised "clouds" of water vapour at anyone walking beneath.

When the Cloud Cast detects someone walking beneath, a series of nozzles emit a cooling mist that is backlit by LED lighting. 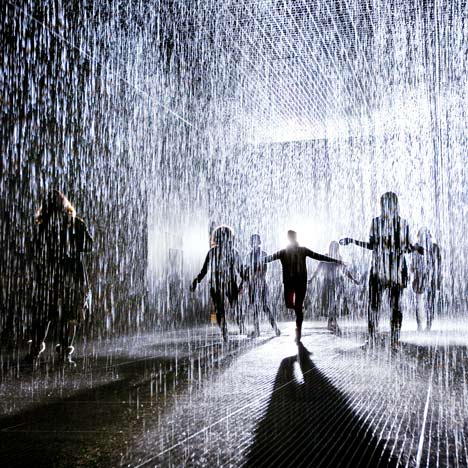 Nine of the best rain-inspired designs

The project was developed by Carlo Ratti Associati to offer an energy-efficient cooling system for tropical desert climates, such as in the United Arab Emirates, where the installation was presented this week.

The system is designed to save energy and water by only targeting people it detects, rather than pumping mist through an entire space.

"Evaporative cooling has been used for centuries in the Arabic peninsula and is still more energy efficient than, say, air conditioning," said studio founder Carlo Ratti, who is also director of MIT's Senseable City Lab. "It is based on generating a cloud of mist that cools the air around it while it evaporates."

"In traditional systems, however, a lot of energy and water are consumed for cooling outdoor spaces, even when sparsely used," Ratti continued. "In our project, we focus misting on people, gaining order of magnitudes in efficiency."

The jets of mist are expelled from an series of identical cylinders mounted on the ceiling. These "nebulisers" are controlled by a series of ultrasonic sensors embedded in the suspended structure, which detect passing pedestrians by interpreting the echoes from high-frequency sound waves.

This data is fed to a central control system that triggers the hydro-valves and LEDs in proximity to the detected target.

The Cloud Cast is intended to make cities like Dubai, where summer temperatures average around 40 degrees celsius, more liveable.

"We envision the city of the future to be a place designed for people, giving them a chance to actually shape their environment and to fully experience their everyday lives and interactions," said project manager Emma Greer, from Carlo Ratti Associati.

The installation was unveiled at the Museum of Future Government Services during the UAE Government Summit in Dubai on Monday. The project follows Carlo Ratti Associati's similar proposal for a heating system, which also uses motion sensors to focus beams of infrared radiation on people as they move through a building.