A corrugated steel roof supported by bamboo columns provides shelter for three buildings, a bicycle workshop and a playground at this community centre in Bangladesh (+ slideshow).

Rotterdam-based Schilder Scholte Architecten was commissioned by non-profit organisation Pani to build the Pani Community Centre in Rajarhat, a town to the north-east of Bangladesh, near the Indian border. 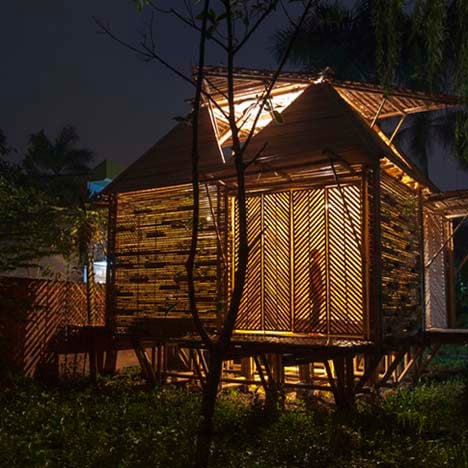 The 910-square-metre complex comprises three volumes built from plaster-covered brick, with some sections picked out in bright yellow paintwork. A pair of two-storey blocks house a school, while a single-storey block contains a bamboo bicycle workshop, store and rooftop meeting space.

All three blocks and a courtyard are sheltered by a wide U-shaped canopy made from recycled corrugated steel panels, supported by a framework of thick bamboo canes.

The volumes are oriented east-to-west to allow cross ventilation, reducing the running cost of electric fans, while the roof overhang provides additional shading and rain protection for the irregularly angled doorways.

The workshop and store face the road, while the classrooms and toilet blocks are positioned near a pond towards the back of the site. This layout is intended to lure customers to the shop, while providing seclusion for the school.

The school's road-facing facade is made from exposed concrete with a smattering of small square windows, while a row of concealed columns support its rear facade, producing a series of tall narrow windows that minimise direct sunlight.

The inside of each slit window is painted vivid yellow, adding slashes of colour across the southern facade.

Inside, the classroom walls are painted a pale grey-blue. This colour scheme was devised by the architects to repel flies, which have been proven to be attracted to darker shades.

"Some biomimicry elements are put to the test here!" said the architects. "The interior walls are coloured in light blue, a hue that flies shun."

According to the architects, the yellow paintwork references the flowers of the mustard plant, which covers large parts of the region.

"Grey and black are the other shades, which in turn refer to the colour of the Bengal earth before and after rainfall," they added.

A steel and timber staircase rises up between between the two school blocks, and a decked walkway bridges the courtyard, linking the upper floors of the school with a rooftop meeting space.

A bamboo strut between the two metal down-posts of the walkway is used to suspend a swing with vivid yellow rope.

Walls and doors off this area are clad in bamboo – a reference to the bamboo bicycle frames that are produced here.

The hand-made bricks, mango wood and local mortar used to complete the project were all locally sourced.

"During the design process, attention was mainly focused on locally available materials and weather conditions," explained the studio. "The starting point was to realise a building using materials and skills from within a 15-miles radius around the site.