Lengths of delicately woven fabric were draped over metal skewers at this Tokyo exhibition about the tradition of hemp textiles in Japan (+ slideshow). 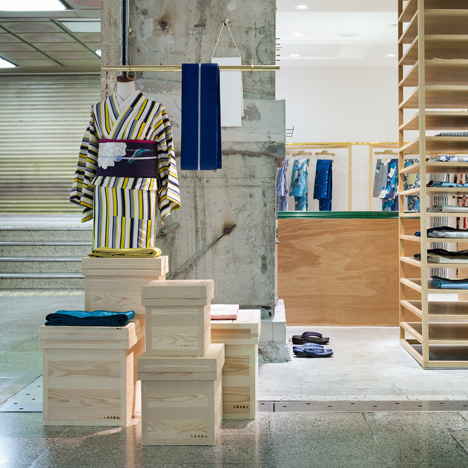 The show celebrated the release of a new fabric made from woven hemp – a material made from cannabis plant fibres that was once widely used in Japanese garments, but saw a sharp decline after the prohibition of cannabis in the 1930s.

Plinths made from tall steel rods of varying heights supported the fragments of white fabric in a split-level gallery space that was filled with white gravel.

The lengths of fabric were laid out flat as the spindly structures would allow, so that visitors could hone in on the "lightness, softness, delicate thinness" of the material.

"With the calm and serene environment created, the hope is to have visitors have a fresh approach to hemp fabric and to explore the historical background to a forgotten tradition," said Seki.

"Visitors are invited to interact with the display, so the details of the piece can require more attention."

A series of colourful printed textiles were hung within pale timber frames and dotted throughout the white exhibition space.

In Japan, hemp use first began in the Jomon period – around 12,000 BC – where the fibrous textile and its narcotic counterpart were used in religious and traditional ceremonies.

Seki attributes the decline of hempen fabrics to the prohibition of cannabis after the Second World War – under the Cannabis Control Law, possession of the narcotic produced from the plant can lead to hefty prison terms and the production of hemp requires a licence.

"Cannabis is known to be an integral part of Japanese culture, as it has been traditionally applied not only in fabric but in agriculture and farming, integrated in religious ceremonies in the Shinto region," explained the designer.

The Forgotten Fabric is the latest in a series of projects by the designer intended to promote the use of traditional textiles in Japan, following a pair of kimono shops.

The exhibition took place for three days in October at Daikanyama Hillside Terrace.