Design Indaba 2015: the design industry has lost touch with its social and cultural values and is producing "too much shit design", according to Hella Jongerius.

Speaking at the Design Indaba conference in Cape Town this morning, the Dutch industrial designer urged the profession to adopt a more ethical approach to its work.

"I am calling for a new holistic approach to design," she added. 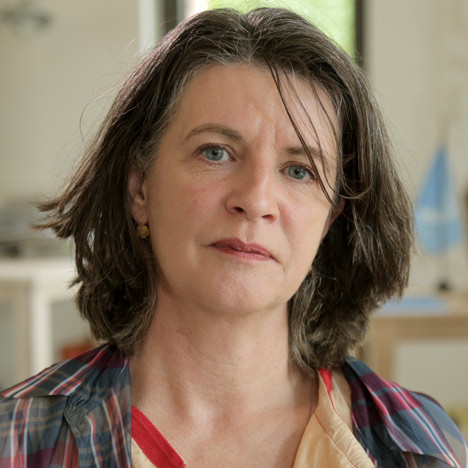 "I work best in a new field or culture" - Hella Jongerius

Design companies have abandoned quality and instead are too focused on generating quick profits, Jongerius argued.

"If you look at the original values of industrial design, the important values were to connect cultural awareness and social responsibility with practical economics," she said. "This is how the Bauhaus started."

"But along the way we seem to have lost the quality. It's not simply because industry doesn't want to do it, but somehow the quality seems to have been less important and the main facet has become more and more economic profit."

According to Jongerius, the industry is stuck in a cycle of producing an endless stream of new products to tempt consumers.

"Profit can best be gained if consumers desire the newest of the newest," she said. "[But] when my parents needed a sofa they saved for many years and they really invested a lot of thinking in it. The creation of cheap stuff has gone too far."

Hella Jongerius, who works with brands including furniture company Vitra, textile manufacturer Maharam and airline KLM, is one of the most influential living designers and has pioneered the introduction of craft sensibilities to industrial design.

In her talk, Jongerius explained the five-point "design mentality" that informs her work.

Firstly, she strives to always design her own materials, for example by creating bespoke yarns from recycled cabin-crew uniforms and waste wool for the carpets used in the KLM business class cabins she designed.

Dezeen Book of Interviews: Hella Jongerius features in our new book, which is on sale now

Secondly, she employs a hands-on design process, working with models and material samples rather than a computer whenever possible. For the KLM armrests, Jongerius hand-carved foam models "so you can feel the radius. What is a radius if you type a number into a computer?" she said.

Thirdly, she tries to introduce imperfection into industrial processes. Her B-Set range of tableware, designed in 1997 for Makkum, involved deliberately setting the kiln temperature too high so the porcelain buckled slightly – a technique that she says has now been widely copied. "Perfection kills everything," she said.

Fourthly, rather than starting anew, she bases her work on pre-existing designs. Jongerius based her fabrics for KLM on drawings she found in the airline's archive by De Stijl architect Gerrit Rietveld for a cabin interior that was never realised; when working on the North Delegates Lounge at the United Nations in New York she discovered Le Corbusier's original colour palette for the building's interiors and used that as her starting point.

"I never start with an empty sheet of paper," Jongerius explained. "I start with a classic or the archive."

Finally, she believes in having her own signature, so her work is instantly recognisable. One way she does this is by combining several different fabrics and colours in an object that would usually use just one, such as the best-selling Polder sofa she designed for Vitra in 2005.

"More values than just the new – that's really what I'm looking for," she said. "What can be inside an object beyond just the new? Is striving for the new the main problem of consumer society? Why does a piece of art never become boring? I think it's because it's holistic. Good art triggers the imagination over and over again. That's a feature that we have lost in design."