Dezeen's Face to Face podcast series continues with a conversation with Dutch industrial designer Hella Jongerius, who explains how she grew up on a tomato farm and discovered her creative ability when she took an evening course in carpentry.

Jongerius, known particularly for her influential work with colour and textiles, is not afraid to speak out about the industry and about her gender.

"I find it stupid," she said when asked how she feels about being regarded as the world's most important female designer. "As if my creativity is in my breasts."

Raised on a tomato farm

The daughter of a tomato farmer, Jongerius' childhood was devoid of cultural experiences. Her earliest brush with designing and making came via traditional women's handicrafts.

"I was raised up in the 70s and we girls sat together and knitted and macraméed and decorated our rooms," she said in the interview. "The creativity was in the air and I knew I had intelligent hands."

She initially rejected attempts to persuade her to pursue such stereotypical activities.

"A teacher once told me 'you have to do something with textiles' and I was not interested at all," she remembered in the interview. "I thought they had pushed me in the female corner but in the end I knew my talents were in that direction."

She studied creative therapy but abandoned her course, instead taking an evening class in carpentry and discovering a talent for it. She decided to go to design school but was initially rejected by Design Academy Eindhoven for being "too technical".

Designing for Vitra and KLM

She was eventually accepted and graduated from the academy in the early 1990s. She then became part of Droog, a highly influential design collective started by Gijs Bakker and Renny Ramakers that launched the careers of a new generation of Dutch designers including Jongerius, Richard Hutten and Marcel Wanders.

She quickly began to get work from design brands around the world including New York textile firm Maharam and Swiss furniture brand Vitra.

The radical, blocky Polder sofa she designed for Vitra in 2005 became one of its best-selling products. However, when Vitra's then-chairman Rolf Fehlbaun first asked her to design it, her reaction was:  "I don't have a sofa. I hate sofas!"

Jongerius has also worked with Dutch airline KLM to transform its cabin interiors, using textiles and colour in a way never before seen in aviation design.

"I think we created a human space within this very hard industrial world and inconvenient space," Jongerius explained.

"Too much shit design"

Jongerius has previously spoken out about the wastefulness of industrial production. Her 2015 manifesto Beyond the New, written with theorist Louise Schouwenberg, called for an end to "pointless products, commercial hypes and empty rhetoric" in design.

"There's too much shit design," she said in the podcast. "It's easy to say but the answer is so much more difficult."

However, Jongerius remains optimistic about the role designers can play.

"I want to fight the battles within the industry," she said. "It is slow, it's boring and it's bullshit but there are the real challenges and there we can really change something."

Produced by Dezeen's in-house creative team Dezeen Studio, Face to Face episodes will be released every Tuesday for the next eight weeks. Interviewees will include David Chipperfield, Roksanda Ilinčić and Tom Dixon.

Designer Thomas Heatherwick featured on the previous episode of Face to Face, where he discussed his childhood fascination with engineering, his distaste for architectural discourse and how he completed his first building while still a student. 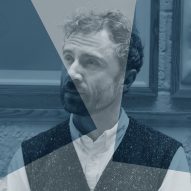