"From now on, a concerned approach to design will not simply mean returning to past ideas and making more meaningless stuff," says Jongerius in an animated video she describes as a "woven portrait".

The Dutch designer, who is based in Berlin, says she is spending time weaving during the lockdown.

"I feel I'm interwoven with all humans"

"I'm gathering with my family and I'm weaving, which is my form of meditation and a way for me to reflect on what's happening in the world," she says. "And although we are distancing ourselves from one another, I feel more than ever, I'm interwoven with all humans in the world," she adds.

One of the world's most successful industrial designers, Jongerius has worked for brands and organisations including Vitra, airline KLM and the United Nations.

Yet she has often questioned whether designers should be helping to produce unnecessary products, asking "Why create another piece of furniture?" in a 2013 video interview with Dezeen.

In a podcast interview with Dezeen last month, the outspoken designer described the design industry as "slow, boring and bullshit".

"I see a great potential"

"This moment feels like a disaster and an opportunity at the same time," Jongerius says of the coronavirus pandemic. "I see a great potential."

"We now could crack the nut with all our global problems we are facing. And for us designers, let's take this change. Let's see it as a chance to get away from old beliefs from what we thought was the norm and take action to reassess our priorities." 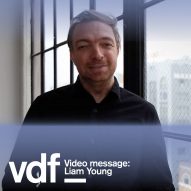 "The time beyond the new has come," she concludes, referring to the "Beyond the New" manifesto she co-wrote with design theorist Louise Schouwenberg in 2015.

"Now more than ever, let the world know what you're aiming for. Be idealistic and be bold, be radical and feel involved. Work on projects that feed your soul and push the envelope for a better world. Take your own yarn, and together we can weave the new texture."

In the run-up to the launch of Virtual Design Festival on Wednesday, Dezeen invited architects, designers, artists and industry figures to record video messages from lockdown. We also put out an open call for submissions from readers - read the brief here.

We plan to publish one clip every day during the festival, plus a montage featuring over 30 of the messages we've already received with be published on Wednesday to launch VDF.