Geneva Motor Show 2015: British manufacturer Aston Martin has released images of a new carbon-fibre racing car that the brand says offers hints of the design it will roll out for future road vehicles (+ slideshow). 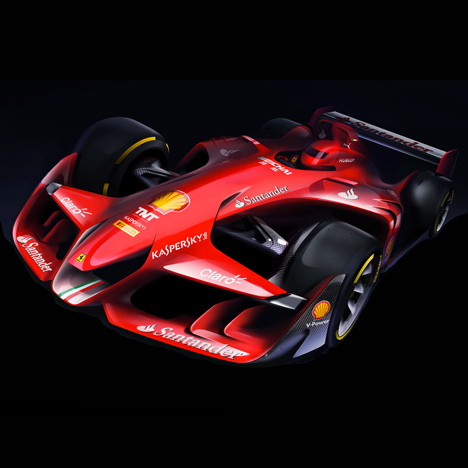 It features a monocoque – or single-piece skin – with sweeping lines, a low-sitting cockpit, and exaggerated front and rear wings.

The interior of the vehicle is stripped down to an absolute minimum to reduce weight and features a racing steering wheel, digital display screen, bucket seats and an angled dashboard with integrated control settings.

Further details of the design will be released when it debuts at the Geneva Motor Show next week, alongside the brand's Vantage GT3 special edition.

It will be the first entirely new design released by the brand under its current CEO Andy Plamer, who left Japanese manufacturer Nissan to join Aston Martin in September.

"With a design language hinting at the next generation of Aston Martin sports cars, this supercar is powered by the most potent iteration yet of the company's 7.0-litre V12 petrol engine," said Aston Martin.

Only 24 models of the car will be made, and owners will be offered extensive track training prior to delivery. Each car will also have its design tailored to its owner, with various colours available for trims and upholstery.

"Aston Martin Vulcan is, by its very nature, a rare and thrilling supercar," said Palmer. "Designed and engineered to deliver a genuinely bespoke driving experience that draws on our rich heritage, this car tailors its power and handling to both the capabilities of the driver and the characteristics of the track."

The Vulcan includes a number of technologies developed by Aston Martin for competitive motor sport, including a powerful petrol engine that generates over 800-brake horsepower (bph), and a suspension kit featuring an anti-dive mechanism.

Dive indicates the degree to which the vehicle's front leans forward when braking. The less a vehicle 'dives' forward, the greater its stability.

Adjustable dampers – or shock absorbers – act to minimise reverberations and produce a smoother ride, while front and rear anti-roll bars work to reduce the amount the vehicle rocks from side-to-side during fast cornering.

The heaviest component, the engine, is placed between the driver and the front axle to improve weight distribution.

Power from the engine is delivered to the rear wheels only, keeping the front wheels dedicated to traction and steering.

The monocoque is made from carbon fibre to increase its strength and help protect the driver from impacts. Using a single piece, rather than multiple components, spreads any stress put on the vehicle during racing across the entire shell.

This technique was first used in car design by British supercar brand McLaren in 1981 and is now common in high-end motor sport.

Using lightweight carbon fibre also has the effect of significantly increasing the vehicle's power-to-weight ratio – the actual performance of an engine, which is calculated by dividing the engine's power output by its total weight.

Other brands showing in Geneva this year include Ford, which has developed its first supercar in 10 years.