Music: a plasticine depiction of Radiohead singer Thom Yorke is "stuck in a plastic reality" for this new video created to accompany the British band's 1992 track Creep. 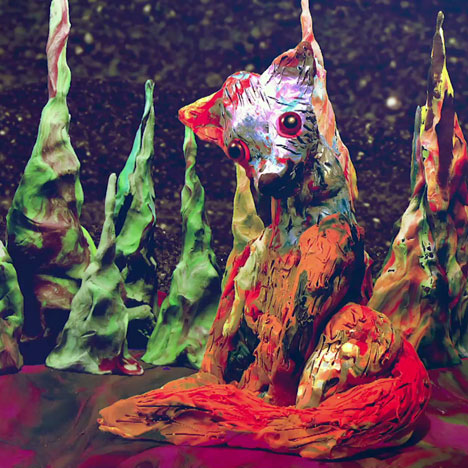 "The idea was to create a hero who is stuck in plastic reality where he feels as a stranger – despite being made of the same plastic material as this environment," she told Dezeen. "He could have been an astronaut who crashed into this sterile planet and became its prisoner, or maybe it's another dimension."

At the beginning of the video, Yorke's facial features emerge from a white background. His mouth comes first, eating a small scuttling stereo before lip-syncing to the song.

"I'm fascinated by the stop-motion technique and the magic opportunities that plasticine provides in this respect" said Tsoraeva.

These lengths then cut up the plasticine and each part becomes a snail-like entity that slithers around independently, attacking the cable balls.

Later on, more lengths of cable are used to represent rainbow-hued grasses in an underwater scene while Yorke's mouth continues to sing.

"In the middle of the film we see the plastic water plants with flowers containing black and white images from his memory," said Tsoraeva, who explained that the images used are photographs of Yury Gagarin – the first man in outer space.

The backdrop drains away as his other facial features return one by one on tiny legs, arranging themselves in the wrong order before the video ends.

"During the film the hero is trying to escape this place but he doesn't succeed," Tsoraeva added.

She revealed that the most challenging aspect of the project was creating Yorke's likeness.

"The most difficult thing was to create Thom's face," said Tsoraeva. "I sculpted a mould so I could have as many faces as I needed. I also filmed a friend of mine who performed this song trying to imitate Yorke's manner of singing, which is just impossible. Then I used this basic video to mimic facial movements of my Thom's head in plasticine."

Preparation for the video, including building all of the characters and backgrounds, took four months.

Nine months was then spent manipulating the arrangement and capturing the individual frames that were compiled together using Dragonframe software.

"I made everything in a very small archive room that I transformed into a studio, I even set up the light by myself," Tsoraeva said. "It cost me a year in the darkness of my studio without knowing what the weather was outside."

Creep was Radiohead's debut single and was featured on the band's first album Pablo Honey, released by record label EMI in 1993.

"The lyrics of the song are very nostalgic to me," said Tsoraeva. "It is reminiscent of unreachable beauty, of something that has been lost forever."