News: Swiss watch brand Mondaine has unveiled a smartwatch with an analogue face – which it says is the first Swiss watch to combine traditional watchmaking with connected technologies.

Described as a "horological smartwatch", the Helevetica No 1 Smart shares most of its design features with Mondaine's standard Helvetica range, created as an homage to the iconic 1950s Swiss typeface of the same name.

But as well as using a traditional quartz movement to tell the time, the watch includes a built-in activity tracker. A small subdial on the face communicates data in an analogue format using traditional-style hands and markings. 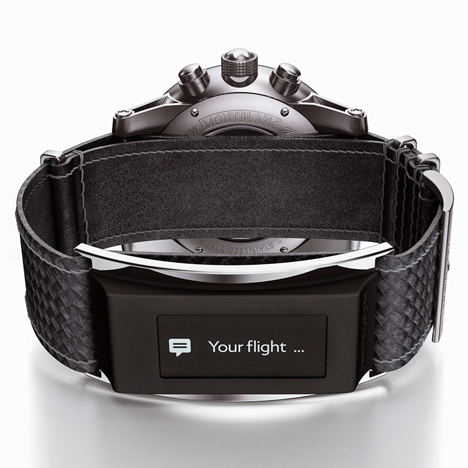 "At first glance its dial bears little resemblance to the blinking LED screens of its competitors of smartwatches; it just looks like a regular Mondaine Helvetica Bold," explained a statement from Mondaine.

"The clue lies in the subdial at six o'clock. This isn't a small-seconds or an annual calendar, but an analogue representation of the smart technology that is at the heart of this unique timepiece."

Mondaine is best known as the manufacturer of the Swiss railway clock with its famous red ticker. For the No 1 Smart it partnered with Manufacture Movements Technologies (MMT), another Swiss-based company that is focused on developing technology for watches.

MMT is backed by luxury watch company Frederique Constant Group and Fullpower Technologies – a Silicon Valley-based firm that has developed wearable technology for brands including Nike and Jawbone – and has created a smartwatch platform called MotionX.

This combines a range of sensors to track activity with technology for collecting and communicating data, which is then interpreted using an app on the user's phone or tablet.

MotionX components are built directly into the movement – the engine that usually drives the hands around the watch face and powers any additional features like a calendar window or chronograph.

According to Mondaine, MotionX-powered watches will have a battery life of more than two years, far exceeding most smartwatch designs.

"This is a beautiful Swiss watch that is also connected and smart," said Andre Bernheim, CEO of Mondaine.

"This is the first-ever Swiss-made horological smartwatch," he said. "It is a world first and Mondaine is proud to be at the forefront of this new technology, thanks to a collaboration with MMT."

The prototype design – with a brushed-steel case, white face, sapphire crystal glass cover and a leather strap – will debut in March at Baselworld, the watch industry's biggest trade event. Mondaine expects that it will be available to buy in autumn.

Only two other watch brands are licensed to use MotionX thus far – Frederique Constant and Alpina. Both of these Geneva-based brands are preparing to release their own designs, with more than 10 styles for men and women due to launch this year. The first will go on sale in June.

Swiss watch brands have been relatively slow to adapt to developments in wearable technology, but the unveiling of the Apple Watch at the end of last year has created additional pressure.

Due to go on sale in April, the device was described as a serious threat to Switzerland's watch industry by Jonathan Ive, Apple's senior vice president of industrial design, according to a report in the New York Times.

"According to a designer who works at Apple, Jonathan Ive, Apple's design chief, in bragging about how cool he thought the iWatch was shaping up to be, gleefully said Switzerland is in trouble — though he chose a much bolder term for 'trouble' to express how he thought the watchmaking nation might be in a tough predicament when Apple's watch comes out," the article said.

Montblanc became one of the first major Swiss brands to enter the wearable technology market in January, but chose to add a device to its straps instead of turning its analogue timepieces into digital smartwatches.