Goad created the Modular Artificial Reef Structure (MARS) to form a base for plant and animal life to return to habitats destroyed by climate change, pollution and destructive fishing practices. 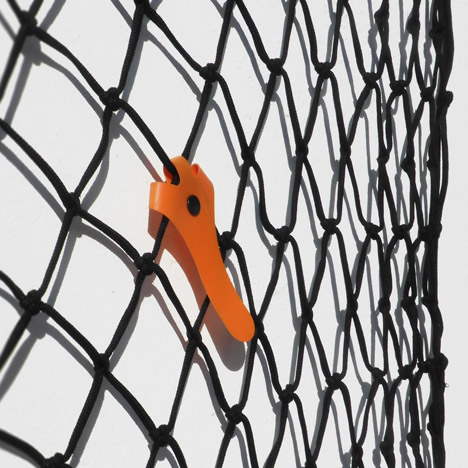 "Both tropical and temperate reef systems are under constant pressure caused by human activity and weather-related destruction," Goad told Dezeen. "These irreplaceable coral reefs are some of the most bio-diverse and uniquely fragile ecosystems on the planet."

The ceramic surface is intended to mimic the calcium skeletons of dead coral, which build up over thousands of years to create structures that living corals attach themselves onto to gain better access to sunlight and plankton-rich currents.

Many of these calcium structures are damaged during large storms and dynamite fishing, but Goad's MARS can replicate the forms to help bring life back to affected areas.

"Because of the modularity of the product the system can be built in any shape and size depending on the requirements of the damaged reef structure," Goad said. "What may have taken 100 years to restore naturally can be reduced to an estimated eight to 15 years using the MARS system."

Each of the MARS units is composed of eight slip-cast ceramic vessels, filled with marine-grade concrete and reinforced with composite bars to add weight.

"Ceramic has proved to be one of the best materials for artificial reef use, especially when trying to encourage the colonisation of sensitive corals," said Goad, who explained that the material has an extremely long lifespan underwater.

The modules are intended to be used in combinations to create structures at the right scale, and are joined together using concrete clamps. "The modular construction process has a strong relationship to Lego," Goad said.

The structures can be deployed to the bottom of shallow waters from small boats by divers, rather than using large machinery.

MARS has already been trialled in locations around Melbourne's Port Phillip Bay – a temperate reef environment – as well as sites in Cairns and at local aquariums.

Once in place, the system first attracts small bottom-dwelling fish looking for shelter from predators.

Other organisms begin to colonise the structure during the first few days. Those dependant on sunlight such as corals and seaweeds attach to top surfaces, while filter feeders like sponges cling to the undersides.

Fish and crustaceans move in after a few months, when plant coverage has become thicker.

"Many people do not agree with the use of artificial reefs for restoration, believing that reef systems should be left alone to restore themselves," said Goad. "In many cases this is an acceptable practice, however when the rate of destruction far exceeds the rate of natural coral growth then we must intervene."

"MARS is simply one of many restoration techniques for reef environments and is in no means a complete solution, but it does provide a unique opportunity for humans to physically help to restore damaged reef environments leading to a more informed and caring community," Goad said.

The duo hopes to test a full structure with a minimum of 20 units in a tropical reef environment.