This museum in Seoul, South Korea, is dedicated to women who were coerced into sexual slavery by Japan's imperial army during the second world war (+ slideshow).

South Korean studio Wise Architecture –  who recently completed an office building with a cage-like structure – converted and extended a 30-year-old house in the Seoul neighbourhood of Seongsan-Dong to create The Museum of War and Women's Human Rights.

The 330-square-metre museum houses exhibitions and archives on the war crimes committed against women who were forced to work in military brothels during the second world war.

"Comfort women" – a translation of the Japanese euphemism ianfu used at the time – were women and children who were coerced into the brothels by the promise of work, or abducted from countries including Korea, which was occupied by Japan between 1910 and 1945.

The museum lacks any of the typical paraphernalia such as an reception desk and obvious signage and is deliberately designed to make visitors feel uneasy.

"This museum doesn't have a nice entrance, a lobby, a kind information desk or a large exhibition space," said the architects. "There is no big signboard telling us about the museum. Instead, a guide walks with visitors inside and outside of the museum and tells us the story of the place." 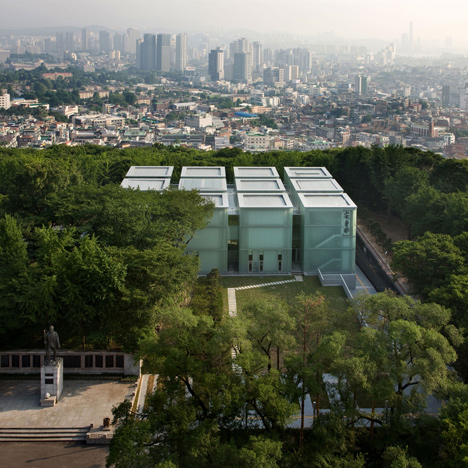 "Visitors experience this uncertain situation, which is somewhat similar to the one that the elderly ladies experienced when they were taken away to the war as 'comfort women'."

The clay brickwork of the original house was disguised by a screen of perforated black bricks that envelops the upper floor of the structure.

The new exterior wall frames the semi-external spaces that run around the periphery, while exhibitions are spread across the building's two upper storeys and a small basement.

"The house is located in a quiet neighbourhood, is 30 years old, and has a garden with thick grasses that appear to have been abandoned for a while," explained Wise Architecture.

"We wanted to build a museum that might be small but has a strong presence," said the team. "An extension of the house was difficult, because of practical matters of budget and parking space, so our concept was to use spaces between walls outside and the retaining walls as semi-external spaces."

The museum guides are former comfort women, who lead visitors to the museum from the street through a small doorway in the end of the building.

Corralled in an empty room, visitors observe a moment of silence before being guided through four areas with the themes memory, remembrance, healing and recording.

A black metal staircase ascends to the first floor through a brick-lined stairwell. The names of contributors to the museum are inscribed on the black walls that line a further atrium over the entrance hall.

Bricks were laid in a staggered pattern around the upper floor to create slim rectangular perforations. Windows face down to an enclosed walkway, sandwiched between the two walls and with views over the garden and neighbourhood.

Downstairs, an archive area displays documents and memoirs, and provides a space in which guests have the opportunity to talk with their guides or other visiting war survivors.

A row of floor-to-ceiling windows looks into a walled garden planted with wild flowers, and beyond into a neighbourhood where many of the now-elderly women grew up.

This museum was completed in 2012, but recently featured in the exhibition Out of the Ordinary: Award-Winning Works by Young Korean Architects, which was organised by London Metropolitan University's The Cass Faculty of Art, Architecture and Design.

Photography is by Kim Doo Ho.