This protective suit for patients suffering from pathogenic diseases such as Ebola allows a wearer freedom to move and interact with the outside environment.

"The brief was to look at the problem from the other end of the telescope," principal Bruce Renfrew told Dezeen. "How can we protect doctors and nurses from infection whist maintaining the care, provision and comfort afforded to the patient?"

The suit isolates the patient from their external environment to prevent the transmission of viruses. Primarily made from thermoplastic polyurethane film, the suit is designed to be resistant to microbial contamination and impervious to fluids or gases.

All seams and closures are hermetically sealed, meaning they are airtight and microbiological organisms are unable to pass through. 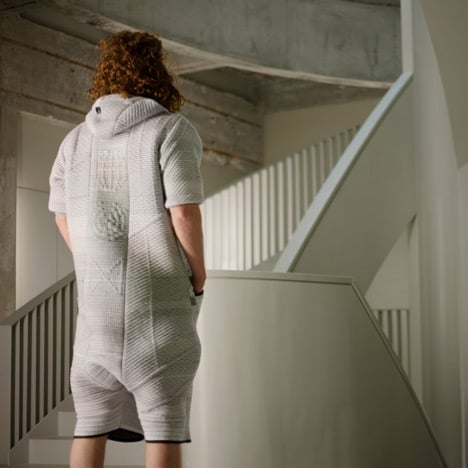 BB.Suit 0.2 is an outfit that cleans polluted air

Isolation is used in a number of current treatment facilities to prevent the spread of the viral disease. However, most systems are made up of closed environment chambers or large pressure containers, and require healthcare workers to occupy the same space as the patient before leaving through further anterooms. Because Ebola is highly contagious through bodily fluids, workers must wear compulsory Personal Protective Equipment (PPE).

Wearers of standard issue PPE suits still risk infection as the garments can be difficult to remove without touching the outside of the material, which might be harbouring bacteria.

"Our analysis suggested that the highest risk of contamination arose as the health workers disrobed after contact with the patient," added Renfrew. "Our design turns the problem of contamination on its head and puts the patient in the protective suit rather than everyone else having to be so protected."

"This gives the patient the freedom to interact with their environment and those nursing them," he continued. "They can, for example, hug relatives, read a book or interact with electronic devices. In principle they could even walk whilst wearing the suit."

Once patients are sealed into the garment, a filtered air flow is provided through inlet and exit pipes. Further pipes located in the collar of the suit provide water and liquid food. Gloves built into the arm and leg sections of the suit allow nurses and doctors complete access to the patient's body.

Materials including wipes and disposables can be passed into the interior of the suit through a transfer hatch positioned on the front torso area. "This is a one-way system – nothing can leave the suit once inside," Renfrew explained. "Debris and waste materials are placed into the waste management receptacle welded to the suit."

This creates a more efficient system compared to current available treatment facilities, which "require services for air changing and filtration, waste removal and incineration, medical gases, water, waste and electricity," according to the consultancy's website. "Often the entire multi-chamber facility is standalone within a larger enclosure such as a temporary building or tent."

Other prototypes developed to protect Ebola healthcare workers include a cocoon-like suit designed by a team from Johns Hopkins University. The suit features breakaway tabs which can be stood on to peel away the garment without the wearer having to touch the outside material.