British architect Richard Rogers is gifting the seminal Wimbledon home he designed for his parents in the late 1960s to the Harvard Graduate School of Design.

Featuring a radically flexible interior, the Grade II*-listed Rogers House in south London was designed and completed by Rogers and his then wife Su between 1967 and 1969 at the start of his career. It is cited by the architect as a precursor to the Pompidou Centre he designed with Renzo Piano.

The house has been owned by Rogers' family since it was built. Rogers' son Ab and his family moved into the house in 1998, and it was adapted and extended before being put up for sale in 2013 for £3.2 million.

A sale never took place and the house was taken off the market. Rogers' charity, the Richard Rogers Charitable Settlement, is now donating it to the Harvard design school, providing a resource for students studying architecture. 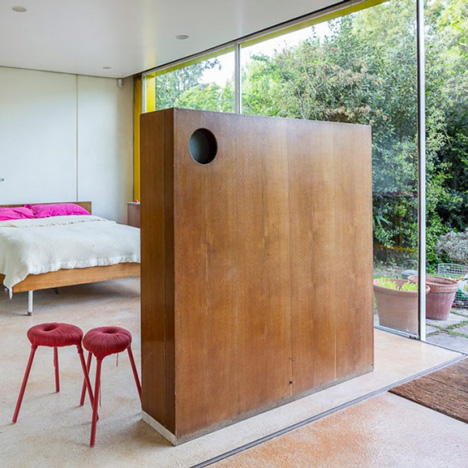 Speaking to London magazine the Architects' Journal, Rogers said: "The house will be a gift to Harvard for training of doctorates in the field of architecture – my charity is giving it to them."

Before the house is handed over, it will be renovated and restored by architect Philip Gumuchdjian, who worked at the Richard Rogers Partnership before the firm was renamed Rogers Stirk Harbour + Partners.

"Philip Gumuchdjian will put the house back to what it was," added Rogers.

Rogers House is regarded as one of the most important modern houses in the UK. The single-storey building boasts a yellow-painted steel frame and glazed facades, while moveable partitions inside allow residents to reconfigure the space.

It was granted a Grade II* heritage listing in 2013, five months before it was put up for sale. Culture minister Ed Vaizey described it as "a masterpiece from one of the most imaginative and exciting periods in private house building in this country".

"Though many will always associate Lord Rogers with iconic works like the Lloyds Building in London, the Pompidou Centre in Paris and the National Assembly of Wales in Cardiff, this much earlier building is highly significant too," Vaizey said.

Speaking to Dezeen in 2013, Rogers said: "If you look at the house in Wimbledon for my parents, which is a single-storey house, it's steel and highly insulated, it's transparent, the bathroom is very compact and all the partitions can move – you can see a link from that to the Pompidou with the difference being about a thousand times the scale."