This black building stretches 37 metres along a narrow plot in the heart of Austria's Rhine Valley to provide a home for a young family and a studio for a graphic designer (+ slideshow).

Austrian studio Juri Troy Architects designed the two-storey wooden structure for the outskirts of Hohenems, a town in the western Austrian state of Vorarlberg that is overshadowed by the rocky peaks of the Rhine Valley.

To contend with a long narrow site measuring 62 by 12 metres, the house was conceived as a 37-metre-long volume. This prompted the building's name, 37m.

The house's spruce wood facade is covered in a charcoal-coloured polyethylene plastic screen, which is intended as an ever-changing advertising space for the graphic design studio.

"The slender and lengthy shape is a product of the property boundaries and makes for a straightforward exception among the neighbouring structures," said the architects. 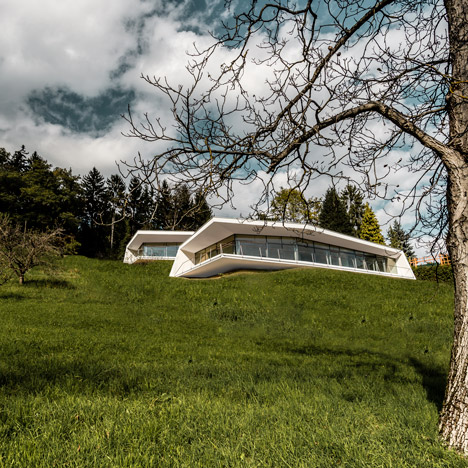 "The biggest challenge was to avoid the feeling of being in such an elongated building and actually create generous and open spaces," they added. "This issue was solved by stringing together the secondary rooms along the circulation areas, which are wider than usual."

Spruce-lined rooms are arranged side by side along one of the long facades on both the lower and upper floors, and severed from the studio by a wide opening through the width of the building.

A roof terrace is covered with larch decking and set into the upper floor above the opening. It is concealed by the facade's translucent screen, completing the separation between workplace and home.

"Living and working are united under the same roof but clearly differentiated by the entrance area on the ground floor and a loggia on the first floor," explained the studio.

White sliding doors divide the row of bedrooms, bathrooms and socialising areas from a corridor featuring inbuilt storage, which extends through the length of the house.

"The floor plan is organised as a sequence of spaces that allows for a practical arrangement of all the ancillary rooms and eventually leads to the generous and open living and working spaces," the studio said.

Two living areas – an upper-floor lounge and ground-level kitchen – are positioned at one end of the block.

These areas span the entire width of the building and are fronted with windows that point away from neighbouring properties and towards the natural scenery.

The glazing is set in from the end of the linear building, providing a covered veranda at ground level that is open to the garden.

Irregularly placed and sized windows in the two long facades are positioned to take in the best views of the landscape.

Photography is by Juri Troy.