Erik Andersson Architects has unveiled plans to build a circular carbon-fibre bridge across a historic moat in Sweden's second-largest city.

Gothenburg's city council commissioned Erik Andersson's Stockholm firm to create a new pedestrian crossing over Vallgraven – the 17th-century moat that surrounds the city's old centre – as part of a wider regeneration of the nearby neighbourhoods.

Andersson plans to build the structure using carbon-fibre reinforced plastic (CFRP), which has become increasingly popular in bridge construction due to its strength and lightness.

"The client wanted us to choose carbon fibre," Andersson told Dezeen. "It is a very strong and light material, so we can make an elegant and slender bridge."

"To save material costs we will also use glass-fibre-reinforced plastic where possible," he added.

The structure will be named Arkitektbron, which translates as Architect's Bridge. 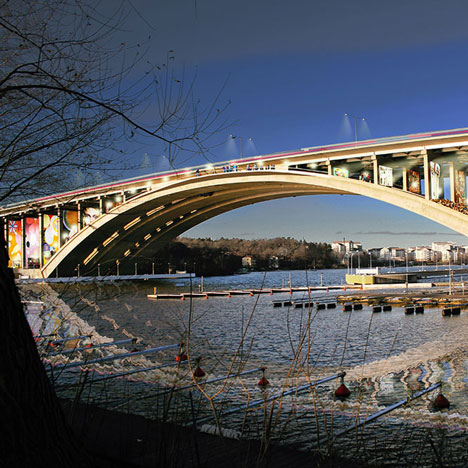 Located between the existing Rosenlund and Viktoria bridges in Kungsparken (King's Park), it will boast a circular shape designed to frame a terraced seating area at the water's edge.

Andersson described this space as an amphitheatre. "Here you can watch a theatre play, a music performance, listen to a book reading or have a picnic," he said.

Like the bridge the firm completed in Norrköping in 2013, Arkitektbron will include an inbuilt heating system to keep it clear of ice and snow in the winter months, while LED lighting will also be integrated.

A glass balustrade will allow children to look down over the water while walking across. Cyclists will also be welcomed, but they will need to disembark before crossing.

Arkitektbron will connect the streets Haga Kyrkogata and Arkitektgatan. It forms part of a series of improvement works planned for Vallgravsstråket – the street lining the moat – to increase accessibility to the city centre and create more public spaces.