Outofstock was founded by four designers – two from Singapore, one from Barcelona and one from Buenos Aires – who met in Stockholm in 2005.

Their Aura Tropicale scent diffusers were created for The Alchemists, an exhibition of work by 15 Singaporean designers and studios that is on show at the Triennale di Milano design museum during Milan design week.

The diffusers are made from a ceramic substrate that is used in the catalytic converters of cars and other vehicles.

"It's really amazing because it filters the carbon monoxide and then a chemical reaction takes place and it becomes carbon dioxide – it purifies the air," explained Wendy Chua, one of the co-founders of Outofstock. "We thought, why not instead of absorbing bad air, give it a scent to hold on to."

The material is dip-dyed, shaped and then impregnated with scent. For the Milan exhibition, the designers chose a lemongrass fragrance to suggest a tropical environment.

The ceramic is not fully fired, meaning that the end product is porous enough to soak up scented oils, but releases the fragrance slowly over a period of up to three days. 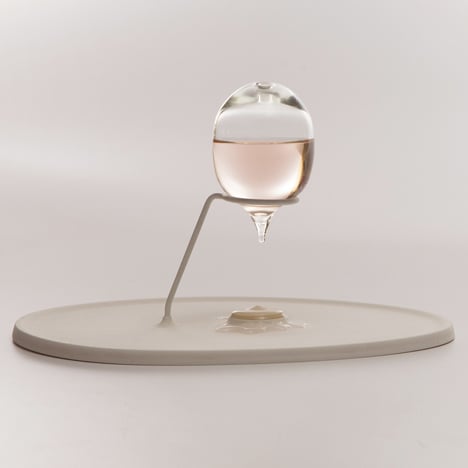 It is produced through an industrial extrusion process that creates an irregular cylinder with an interior made from a series of triangular channels, creating a honeycomb-like structure. This creates a large interior surface area for absorbing carbon monoxide, but also helps distribute other substances such as coloured dye and scented oil.

"It was an industrial element that is not usually visible, but is working always around us in cars and we thought it was a really interesting material with so much potential," Chua told Dezeen. "We soaked it in ink and it just absorbed it like a straw, it was amazing."

To help the scent disperse when air passes over the top of each piece, the studio created rounded tops for each diffuser by hand lathing short pieces of the ceramic material.

"We created this very simple rounded shape to activate the sensorial possibility of the grid structure that it has," said Chua. "It's really bizarre to have these hand lathing techniques on a piece of extruded ceramic."

The ceramic material was sourced directly from a factory that produces it for the automotive industry, and the studio chose two different sizes. The smaller version uses the substrate designed for motorcycles, while the larger version was originally created for trucks.

The designs are currently prototypes, but the studio – whose previous work includes furniture for French brand Ligne Roset and a shelving unit inspired by suspension bridges – has been approached by a perfume company to expand the project using a nano-technology developed specifically for scent diffusion.

"They lacked the objects to create that experience that people can engage with, so they're really excited to talk to us," said Chua. "What we have really done is to objectify a sensorial experience."

"Design is so visual most of the time, once you engage another sense, everyone is excited. It's like the other senses are hungry for something different."

Aura Tropicale is on show at The Alchemists exhibition in the Triennale di Milano as part of Milan design week, which concludes on 19 April.

Photography is by The Primary Studio.