Described by the studio as a "causal stacking chair" the Offset-Frame Chair consists of a shell made from a single piece of plastic resin, supported by a simple powder-coated metal frame.

The shell does not sit flush with the frame, which extends beyond the sides and at an angle from the back.

"Although the composition of the chair is simple, comprised of the combination of a plastic resin shell with a unified back and seat section and a metal frame, it has a design feature detailing the frame section slightly 'protruding' from the shell," said a statement from Nendo. 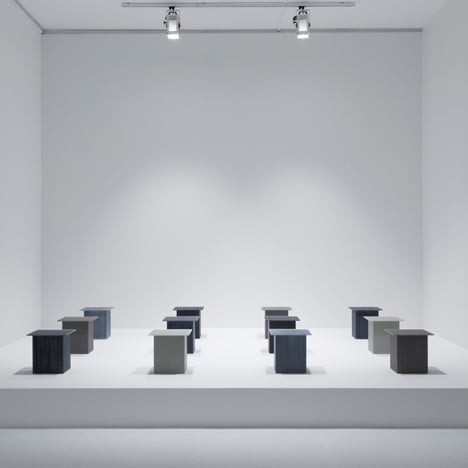 "This has allowed the chair to be pulled out effortlessly just by holding on to the back frame, and has also enabled it to be trailed sideways or carried around and stacked with ease, just by taking hold of the frame on the side of the seat," Nendo said.

The frame is available in three colours and eight different styles, including a basic four-legged version that comes either with or without arms, and a chair on a single column with four feet that can be attached to casters and also has optional arms.

The plastic seat comes in six different colours, and can also be encased in detachable fabric and leather covers.

Nendo has become one of the world's most prolific design studios, producing everything from watches to ice-cream cakes, Disney homeware, shop interiors and architecture projects.

In the last year, the studio designed so many products that it was able to stage a 2014-15 retrospective exhibition during the Milan furniture fair.

The exhibition, shown at Milan's Museo della Permanente from 14 to 19 April, included nine new ranges for glass brand Glas Italia, alongside a range of wooden doors that open using a variety of methods, and tableware designed for Japan's Milan Expo pavilion due to open next month.

In 2015, Nendo has already unveiled a light created in collaboration with Italian designer Luca Nichetto, branding for a skincare range based on Chinese medicine, a chocolate shop in Tokyo, chairs with backrests made from woven baskets, a new store for Spanish shoe brand Camper, a collection of men's t-shirts for Hello Kitty, and a set of unusually-shaped chocolates.