Milan 2015: British designer Tom Dixon has launched a set of lights based on mechanical cogs to accompany his range of brass home accessories.

The textured components such as serrated rings, screw coils and cross-hatched cylinders are modelled on machine parts.

"Tom's obsession with motorcycle engines and metal workshops has given him a lifelong appreciation of the often unloved and un-noticed knurling, the precision of cogs and the tools that go into manufacturing them," said a statement from the designer's studio. 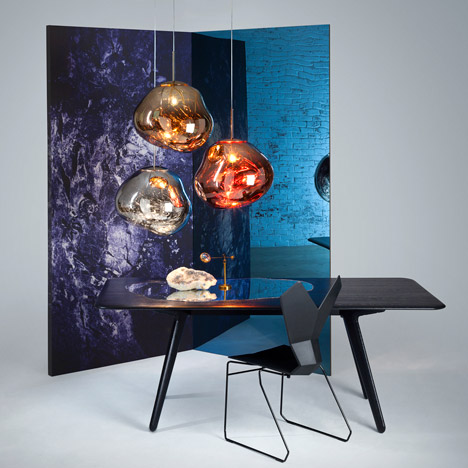 The various solid aluminium elements are assembled into stacks to create three pendants. The Cone design has a conical shade sandwiched between two horizontal cogs, while Dome features a silo-shaped cover.

Stack is primarily formed by three cylindrical elements, which get smaller towards the top and are each patterned with a different texture.

The light bulbs are hidden within the small pendants, which direct the light downward.

Dixon presented the products as part of an exhibition called The Cinema, held in an abandoned theatre in Milan earlier this month.

All of the new products on show, including wingback chairs and "hallucinogenic" globular lamps, were available to purchase on site in an attempt to prevent copyists from ripping off the designs before they made it into production.

In a 2013 interview with Dezeen during the Milan's annual design week, Dixon said the event was a "breeding ground for people who copy our products"