An abandoned house in a small South Korean town has been converted into a cafe by Seoul-based studio Wise Architecture, with a bamboo frame erected around it to provide a terrace for customers (+ slideshow).

Cafe of Wind – named after the breeze that passes through the open bamboo framework – was built from parts of a 300-year-old property that was abandoned when a family moved to a city.

The crumbling property is one of a dozen derelict houses in the neighbourhood according to Wise Architecture, which created the structure to provide a tourist information centre but also a cafe for local residents.

"There were 12 abandoned houses in a small local town, Kasang-ri Kyung-book, Korea, after people who used to live in the houses left for the cities," explained the architects. "The rebirth and abandoned house created a space for residents and tourist alike."

"The bamboo house was built after dismantling parts of a 300-year-old abandoned house and placing a bamboo screen wall and roof over the house," the architects added. "The bamboo screen permits the wind to blow through and guests to view the sky from within." 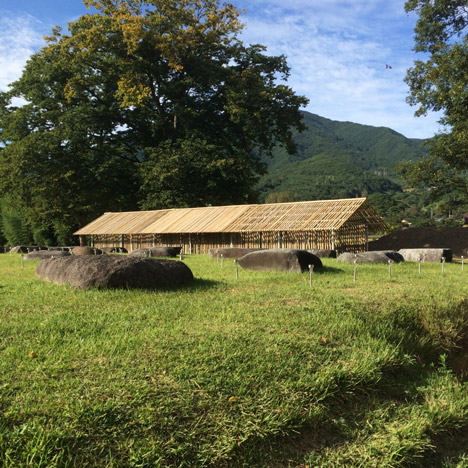 A timber platform was constructed around the perimeter of the property to create an elevated dining terrace that distinguishes the traditional house from neighbouring homes.

Metal steps lead up to the platform, which is encased by a cage of bamboo stems that follows the pitch of the original property's decorative tiled roof.

Walls of the timber-framed house have been removed and the interior gutted to open the structure onto the patio, where wooden stools are arranged around metal tables.

"The creation of the bamboo house was a process of removal," said the studio. "What to remove and what to keep of the old house structure had to be decided prior to adding more materials to the dismantled house to create a useful space."

"As a result, the existing house with the bamboo structure covering it give the affect of a house within a house," the studio said.

Inside, a shelf on one crumbling plaster wall displays a row of pristine white cups that is at odds with the unfinished appearance of the space, while a stainless steel counter and sink provide the basic requirements for making cups of tea and coffee.