Four of these simple stacking chairs by Korean designer Seungji Mun can be made from a standard sheet of plywood without leaving any material left over.

The Economical Chair is made up of a square plywood section for the backrest and a rectangular piece for the seat. Two strips of the material are laminated together to form each of the supports.

All of these elements can be cut from a flat 610- by 1220-millimetre section of plywood, allowing four chairs to be created from a single international standard board measuring 1220 by 2440 millimetres.

The parts are steam-bent to create smooth curves, allowing the backrest to tuck beneath the seat and the legs to be attached to vertical portions on either side.

The project developed from Seungji's previous Four Brothers collection, in which four chairs were also crafted from the same single board of wood to leave no spare material. 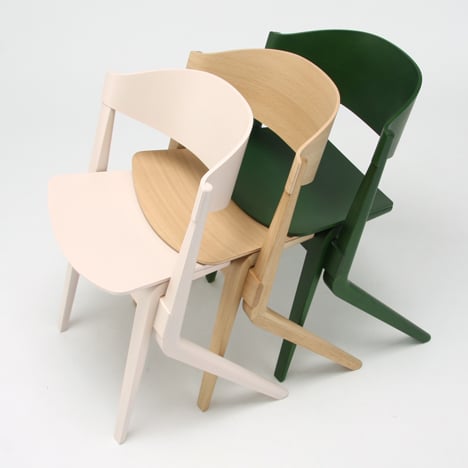 "I would like to inform a serious social issue of industrial waste through such works that were started from worrying about industrial waste generated from the production process of the chair," said Mun.

Although similar in concept, the new designs are entirely different in appearance – Economical Chair features rounded and smoothed edges while the Four Brothers pieces are flatter and more orthogonal.

The Economical Chair is available in three variations, including a natural finish or powder-coated in pastel blue or white.

Mun studied product and furniture design at the Kaywon School of Art and Design in South Korea. In 2013 his Four Brothers chairs were installed in the store windows of fashion brand COS, including locations in Amsterdam, Berlin, Hong Kong, London and Stockholm.