Milan Expo 2015: over 1,000 bamboo panels clad the roof of China's Milan Expo pavilion, which features an elaborate structure that merges the profile of the Beijing skyline with a mountain landscape (+ slideshow).

Named Land of Hope, the pavilion was designed by New York-based Studio Link-Arc and a team from Tsinghua University in Beijing. The aim was to create a building that embodies both Chinese traditions and modern technologies.

The building's predominant feature is its complex roof form. From the front it appears to be a series of curves, while at the back it forms a row of rectilinear shapes.

"We established a roofline by merging the profile of the Beijing CBD skyline and the contour of a mountain range in China," explained Studio Link-Arc founder Yichen Lu, who graduated from Tsinghua University himself in 2000. 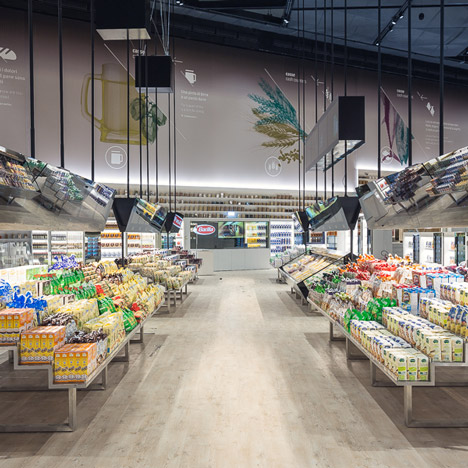 Carlo Ratti creates a digital supermarket at the Milan Expo 2015

"The south elevation is a very natural profile of the mountains, and the north is a profile of the city," he told Dezeen. "We merged them together to create a long-span no-column exhibition space."

Referencing raised-beam structures found in traditional Chinese architecture, the roof framework comprises a series of glue-laminated timber profiles that are each slightly different, as they incrementally morph between the two shapes.

Steel members and cable bracing were also included for additional support, allowing the pavilion's central exhibition space to be free of columns. The roof's surface was then clad with 1,052 woven bamboo panels, which were produced in over 300 variations.

"The roof structure and the bamboo were both derived from traditional Chinese architecture," said Studio Link-Arc's Qinwen Cai, who worked with Lu on the project. "Bamboo is a very traditional Chinese building material, but we transformed it into something new."

A plastic membrane lines the roof underneath the bamboo cladding to protect the interior from rain.

"We tested different materials," said Cai. "We started with glass and then we wanted to have translucency instead of transparency, so we changed it to polycarbonate panels. But then, because it was a very fast construction – just seven months – we decided to change for a membrane that was more watertight."

Raised planters filled with a variety of yellow flowers mark the pavilion's entrance. As visitors approach, the ground slopes down, but once they have entered it gradually begins to ramp back up again.

Aluminium poles with cross-shaped profiles surround the exhibition spaces, intended to create the appearance of a wheat field. These merge into a lighting installation of coloured LEDs embedded in clear acyclic tubes, created with lighting brand iGuzzini.

The exhibition pathway ends at a roof terrace offering views out towards surrounding Expo pavilions.

Despite fears that many Expo pavilions wouldn't be completed in time for the exhibition opening, the Chinese pavilion was finished on schedule.

"One month, even two weeks before, nobody would believe this would be complete," said Cai. "In the last two days everything just finished, it was like a miracle!"

The exhibition runs until 31 October. The Chinese pavilion is due to be disassembled and transported back to China after the Expo, creating a public facility for a park in Qingdao.