Milan Expo 2015: huge mechanical arms are spray painting colourful data across the walls of this pavilion and supermarket that Italian architect Carlo Ratti has created at the Milan Expo 2015, which opens today (+ slideshow).

Working with supermarket chain COOP Italia, Ratti wanted to explore whether introducing digital information into food stores would affect the way that people interact with and select food.

The result is the Future Food District – a pavilion that functions as a real supermarket where visitors can purchase items. The difference is that the 1,500 products on display are positioned beneath digital mirrors that present information about the origins, ingredients and manufacturing of the foods.

"Every product has a precise story to tell," explained the architect, who is also a professor at the Massachusetts Institute of Technology. "Today, this information reaches the consumer in a fragmented way." 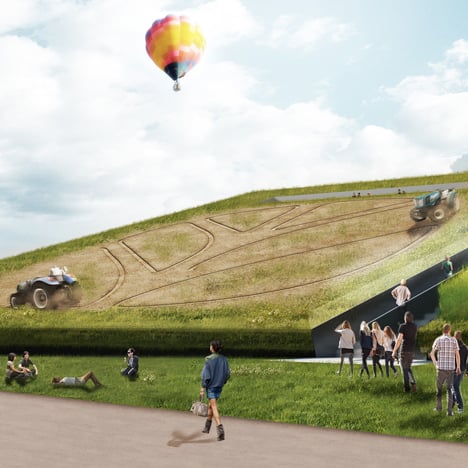 "But in the near future, we will be able to discover everything there is to know about the apple we are looking at: the tree it grew on, the CO2 it produced, the chemical treatments it received, and its journey to the supermarket shelf," he said.

As customers browse and purchase items inside the warehouse-inspired space, information about them is processed by a computer and reinterpreted as data, which is then fed to what Ratti describes as "the world's largest plotter".

The device comprises two mechanical arms that move in two directions across the pavilion's facade, using different-coloured spray paint to create fields of data. On the first day, faces of several customers adorn the walls.

More machines feature inside the pavilion – robotic arms are arranged at the centre of one stand, performing acrobatics as they move apples and cups into different places.

There is also a large wall of changing data that customers can watch while they shop.

"This project is an experiment," said Ratti. "Some parts of it will be more accomplished than others. However, our goal is to expose new forms of interaction with food to the hundreds of thousands of Expo visitors, who can in turn provide their feedback."

"We were inspired by Mr Palomar from Italo Calvino's book of the same name, who enters a fromagerie in Paris and thinks that he's in a museum," continued the architect. "Behind every cheese there is a pasture of a different green under a different sky. Mr Palomar feels as he does in the Louvre, seeing behind every object the presence of the civilisation that has given it form."

"We believe that tomorrow's markets will make us feel a bit like Mr Palomar," he said. "Every product will have a story to tell."

According to project leader Andrea Galanti, the aim was to create a seamless augmented reality without the "cumbersome interface" of products like Google Glass. "In a way, it is like a return to the old marketplace, where producers and consumers of food saw each other and had actual interactions," he said.

"Such advancements in urban farming could really transform underutilised urban spaces into productive areas," said Giovanni de Niederhausern, another member of Ratti's team. "If urban farming manages to find its foothold in major urban centres, its effects could be disruptive, in terms of fostering new relationships between citizens and nature."

Photographs are provided by Carlo Ratti Associati, unless otherwise stated.