Japanese architect Kouichi Kimura chose grey steel sheets for the exterior of this office and apartment building in Shiga, giving it an armoured appearance (+ slideshow).

The building is located on the edge of a busy arterial road in the Japanese city, surrounded by commercial facilities and residential towers.

This prompted Kimura and his studio FORM to use sheets of pale and dark grey steel to give the 500-square-metre office an imposing appearance and to differentiate it from its neighbours.

"The solid walls of the facade are finished with rough steel plates, which enhance the massiveness of the building," said the architect.

There are also three steel-clad fins rising from the roof, give the block the stepped outline of a battlement.

A garage occupies the ground floor of the four-storey building, while the office is set on the first floor and a guest apartment is spread out across the two uppermost levels.

Only a few slit-like windows puncture the steel cladding, which varies in texture from smooth on the facade to corrugated on the sides of the building.

A horizontal opening in a slightly protruding block that forms the second floor provides an aperture for a partially enclosed balcony, while another set below the overhang brings daylight into the office. 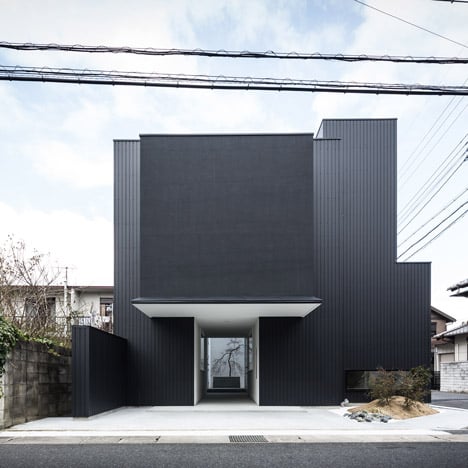 Kouichi Kimura's Framing House combines a home and a gallery

"The elaborately designed positions of the openings create a light appearance," said Kimura.

Both the office and a small decked balcony are accessed via a staircase with checkered treads and a black metal balustrade.

Glazed doors open from a landing at the top of the stairs onto a decked balcony at one side of the block.

A double-height living space is set above the office, while two bedrooms and a bathroom occupy a partial third floor.

A nook in the base of the cast-concrete steps that links these two levels creates a bench. While the concrete is left exposed on the two lower steps of the stairs, the upper flight has been covered in glossy white paint that reflects the light.

Two small lightwells channel daylight down one side of the open-plan living and dining area. Glazed doors at the front of the space open onto a terrace overlooking the car park.

"The impressive design makes the best use of shade and shadow both in the external and internal spaces of the building," added Kimura.

"The radiating light brings about a tender atmosphere on the one hand, but creates crisp space on the other."

A strip of space along the back of the living room can be sectioned off with sliding doors and metal screens to create a home office.

A long white table built into the wall provides a workbench, while a raised platform to one side is lit by a large window with an integrated planter.

Photography is by Yoshihiro Asada.