These four asymmetric wooden pavilions completed by German studio Barkow Leibinger in a Bavarian village accommodate a thinktank for a computing and microelectronics institution (+ slideshow).

Frank Barkow and Regine Leibinger were tasked with designing the campus for Fraunhofer Institute for Integrated Circuits, an application-based research organisation, in the rural village of Waischenfeld.

Clustered together on a hillside site, the four buildings create both working and living accommodation, offering researchers a retreat where they can focus on projects without city distractions.

The scenic setting provided the starting point for the design. The architects were keen for the buildings to be contemporary in style, but also to uphold the medieval character of the village.

This resulted in a series of two- and three-storey buildings boasting gabled roof profiles, timber frameworks and bold square windows.

"The village is characterised by a dense concentration of indigenous masonry and post-and-beam timber houses distributed up and along the picturesque Wiesent river valley," explained the architects in a project description. 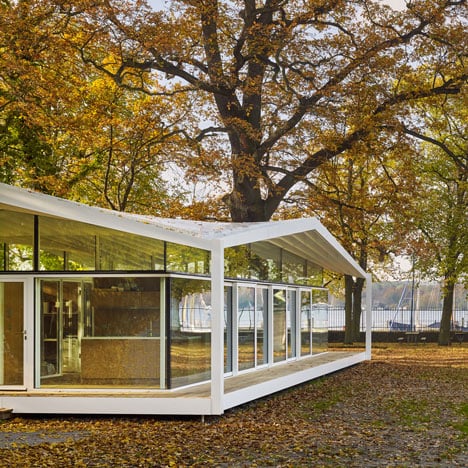 "In order to integrate the research campus into the regional scale of the village, the programme is distributed into pavilions with asymmetrically gabled roofs," they said. "The building volumes are offset from each other in a non-parallel fashion, mimicking the organic quality of the village planning, while enhancing views and orientations, and generating a spatial dynamic between them."

Collectively known as the Fraunhofer Research Campus, the buildings maintain a consistent datum line – meaning the ground floor remains at the same level, despite the incline of the landscape.

"Stepping up the meadow slope, the ensemble is further embedded into the village-scape while remaining legible as a place of learning, research, and exchange," said the architects.

All four structures contain areas for working, including offices, laboratories and conference rooms, but bedrooms are located on the upper levels of three blocks.

A central lobby with an exposed timber-truss ceiling and triangular skylights creates a connection between the different buildings while allowing them to remain visually separate.

This area appears to have no walls of its own, only glazing, making it look more like a sheltered patio than an indoor space. It functions as both an entrance lobby and a cafeteria for employees, while its roof functions as an elevated terrace.

The aim is to eventually add two more buildings, which could also branch off this lobby to the south.

Larch was chosen as an external cladding material, but the bottom of each building is concrete. This base is only visible in a few locations and has been sandblasted to create a gently textured finish.

The roof is copper so that, like the larch, it will show its age over time. Windows are oversized and square, designed to match those on neighbouring buildings.

"A series of operable windows punch through the pavilion volumes, overscaled in relation to the programmes, while simultaneously recalling the historical window types of the village," added the designers.

Inside, flooring varies between tiles and carpet but is always the same dark shade of grey. Walls are painted white, but structural materials and details are left exposed on the ceilings.

Photography is by Stefan Mueller.