Portuguese studio LIKEarchitects has created a steel structure for Porto from a series of stairs and balconies, in celebration of the two architectural elements the designers consider crucial to the city's vernacular (+ slideshow).

LIKEarchitects' installation is made of six steel portions joined to a concrete base. Together, these form three purple spiral staircases connected by a landing at the bottom and a balcony at the top.

The aim was to pay tribute to two architectural elements, the balcony and the staircase, which the designers believe are "imbued in the identity of the city of Porto".

The structure specifically references celebrated staircases in the city, such as the wide entrance to OMA's Casa da Música or the twisting flights of stairs at the Lello Library, and the balconies typical of the old town's 19th-century architecture.

Tripod was first shown in Porto's Largo dos São Domingos – a sharply angled square in the Portuguese city – in March, and will appear again in a different colour in Largo da Rua Chã from 6 to 21 June 2015. 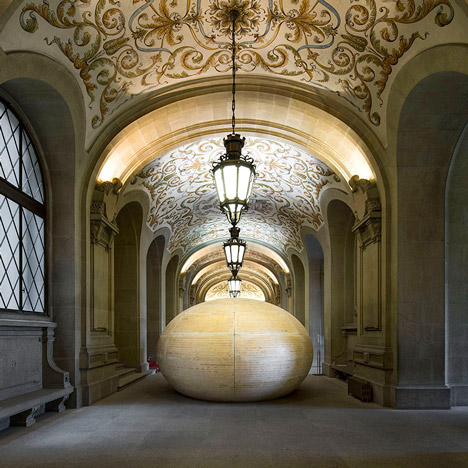 "Its structure was designed to be easily assembled in multiple locations," LIKEarchitect's Diogo Aguiar told Dezeen.

"Its base allows the structure to adapt even to steep sites such as Largo da Rua Chã. Tripod's small scale easily allows it to meddle in different public spaces, establishing new urban relations and intimacies."

"Being an odd number, the complete Tripod path finishes on the upper platform, which you will inevitably go down, therefore starting the path again," said Aguiar. "Thus, Tripod is also related with the idea of the infinite or, more precisely the trefoil knot."

The piece is intended to provoke spontaneous interaction with passers-by, as well as playing host to a programme of planned performance art pieces, concerts and dinners.

"Children love it and they have used it as a double-height playground," said Aguiar. "Grown-ups are definitely more shy, probably because they feel observed while observing the city. Tourists have used it as an urban photobooth and as a viewing point – at a level that is usually only available to Porto's citizens."

Photography is by José Campos.