Automated shutters are used to regulate the internal climate of this environmental science and palaeontology research centre for a university near Barcelona (+ slideshow).

Barcelona-based studios H Arquitectes and DATAAE teamed up to design the ICTA-ICP building for the Universitat Autònoma de Barcelona campus in the Catalonian municipality of Cerdanyola del Vallès.

Rows of transparent shutters that clad the concrete structure create a "bioclimatic skin" that helps to regulate the temperature within.

The corrugated polycarbonate shutters operate automatically depending on weather conditions, like a computer-controlled greenhouse.

This is one of the key features that gained the building its LEED gold energy rating – a certification where buildings are ranked according to their energy efficiency.

"The concrete structure is wrapped and protected by a low-cost exterior bioclimatic skin," explained the architects. "By installing a greenhouse-industrialised system that opens and closes its mechanisms automatically, the solar gain and ventilation are regulated."

"This way, it is possible to raise the interior temperature naturally and guarantee a base of comfort in the circulation spaces as well as in the in-between spaces," the architects added.

The concrete building comprises seven equally sized floors – three above ground and two below – and is covered in rows of the shutters, which are supported by a galvanised steel structure. 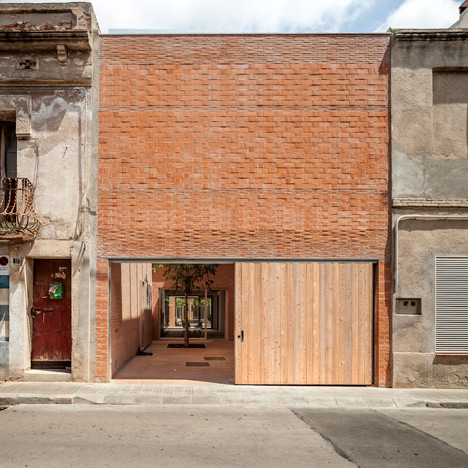 "In accordance with the research fields of the building users, they chose from the beginning a building prepared to give an ambitious response to the challenges of sustainability," said the architects. The studio managed to reduce the building's energy and water consumption by 62 per cent and 90 per cent respectively in comparison to a conventional building of its scale.

Walkways and open meeting spaces surround a large atrium that runs through the core of the building.

The atrium is topped by a zigzag skylight that provides natural light and ventilation for the series of timber-clad offices and laboratories positioned around its edge.

Administration areas, classrooms and a bar are located within these boxes on the ground floor, while the three levels above host offices and laboratories. A vegetable garden is located on the uppermost floor below a glazed roof.

Parking is located on a semi-basement level accessible from one side of the site, while warehouses and more laboratories are set on the floor below.

Air from the two basement levels is redistributed through cavities in the retaining walls and used to temper the atrium, producing a stable temperature all year.

The wood-clad offices feature windows and ceiling fans that provide a degree of control over the climate inside, while laboratories can be more strictly controlled by artificial means.

"The building reacts and adapts constantly, opening and closing itself, activating and deactivating itself, managing to use all the natural possibilities offered by the environment," said the architects.

"The system has been programmed in favour of the maximum passive behaviour of the building and to minimise the use of non-renewable energy sources," the architects added.

Readings from heat, humidity and carbon dioxide monitors located in the office spaces are processed by the central computer system, which uses this data to help regulate the climate.

The external shutters are controlled by a similar process, with roof-based heat, humidity, solar and wind-monitoring devices. During wet or windy weather the polycarbonate shutters automatically close, while in hot and dry weather they open to increase ventilation, giving the building a serrated profile.