A doll's house provided the inspiration for this extension to a house outside Melbourne, which features a gabled profile, a simple gridded layout and a transparent rear facade (+ slideshow).

The architects chose a traditional children's doll's house as the starting point for the design, because they felt it represented one of the most flexible arrangements of living space. They avoided inserting walls, and instead designed furniture to divide up the space.

"The doll's house is an idea about providing flexible, highly sustainable living that is responsive to its context and able to adapt to the changing needs of a family over a long life-span," said the team in a project description. 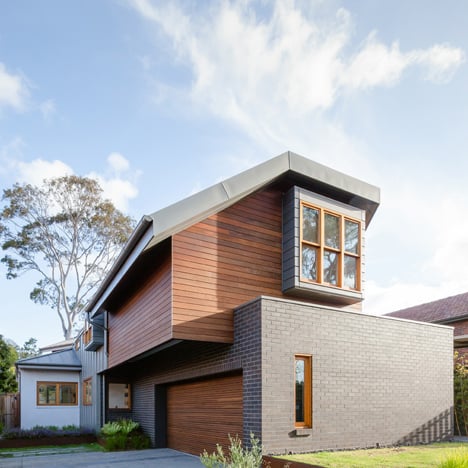 "Shared ideas of creativity, craftsmanship, play and imagination underpin this house, whilst also mirroring the flexibility of a doll's house, where a bedroom can become a living room or dining room by simply moving furniture or joinery," they added.

The extension – also named Doll's House – comprises a two-storey volume with a typical gabled form. It rises above the gable-and-valley roof of the main house, meaning its peak can spotted from the street.

Like the existing house, the new structure is made from timber. This is most visible at the back, where columns and beams frame a small seating area between the house and the garden.

The entire rear facade is glazed, which helps to emphasise the doll's house reference by mimicking the open back of the toy structure, and also allows every room to open out to the garden.

"There is a nostalgic reference to the child's simple drawing of a house in its most basic form, with smoke billowing out of the chimney – a place of happiness and content," explained the team.

"The facade is based on the opening credits of the children's programme Playschool, where every window is different and provides a portal into some other world."

The ground floor of the new structure is slightly sunken below ground, helping to mediate between the garden and the floor level in the main house.

One side of the space contains a living area, while the other accommodates a kitchen and dining area. All three spaces are united by a floor of hexagonal black tiles and a wall of books that stretches from floor to ceiling.

Other prominent materials in this room include grey brickwork, stone countertops, and decorative green wall tiles.

"Materials have been carefully chosen for their ability to demonstrate a level of craft; from oversized exposed timber beams to hand-painted tiles by the owner," said the architects.

The creation of these new spaces freed up space in the main house for a children's playroom and an art studio, while the addition of a new upstairs floor brings the total number of bedrooms up from two to three.

Externally, the sidewalls and roof of the extension are clad with steel panels by manufacturer Colorbond, making it possible to create black and white stripes.

According to the designer, this was intended to reference the building's impressive thermal efficiency and ventilation.

"The striped facade is borrowed from zebras, the only equine animal to live in the savannahs," they said. "When captured by thermal imaging, zebra stripes show large temperature differentials across the different colours, creating small currents of airflow across their bodies."

The final step was to improve the garden, where concrete planters, drystone walls and cobbled paving are complemented by fruit trees, wildflowers, edible plants and vegetables including tomatoes, pumpkins and beans.

Photography is by Shannon McGrath, apart from where otherwise indicated.