Spanish designer Jaime Hayón has created a set of sports-themed furniture for an exhibition at Paris' Galerie Kreo (+ slideshow).

Game On is Hayón's first solo show at the influential furniture gallery, and features a new collection of six pieces designed for the exhibition.

Strips of coloured tape run across the white walls, concrete floors and white display plinths in the gallery, creating patterns similar to those used to mark out tennis courts and sports pitches.

"Jaime Hayón has created a collection inspired by sports — a theme in tune with Galerie Kreo's DNA as Clémence and Didier Krzentowski (gallery co-founders) both come from this industry, having participated in the production of the Olympic Games of Albertville in 1992," said a statement from the gallery.

"The inspiration of sports allows the Spanish artist and designer to bring to life cartoon-like pieces playing with metamorphosis, scales, and disguises. The visual theme of sports also allows Hayón to play with forms, colours, and patterns — graphic lines of sports fields, aerodynamic curves, and ergonomic structure."

Large mirrors shaped like giant table-tennis bats are hung on two walls, each with a wooden handle and coloured edges.

Called Ping Pong Hanger, the mirror design also includes a gold-coloured ball attached to its front on one side of the mirrored surface.

A side table made from marble mimics the shape and texture of a golf ball, while a daybed is intended to echo the form of a bobsleigh.

Called the Sledge Sofa, this features a wooden seat with a thick upholstered foam top and metal legs that looks like the blades of a sleigh or a pair of ice skates. 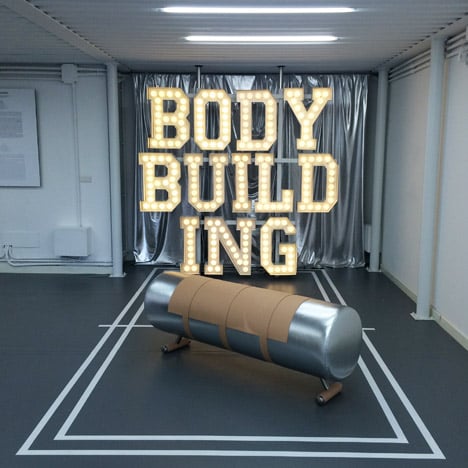 "The daybed Sledge Sofa plays on its resemblance with a sledge or bobsleigh, conveying speed and recklessness only here to invite sleep and relaxation, an oxymoron if you will," said the gallery.

Other pieces in the collection include the Trapeze Light, with a tube-like bulb held between two metal supports attached to cables suspended from the ceiling, and the black Glossy Basket Side Table, which has the markings of a basketball stretched around its sides in orange – reversing the usual colour combination.

Table lamps with teal-glazed ceramic bases feature the same pattern picked out in gold, and a black cabinet is shaped like the multi-level podium used to give athletes bronze, gold and silver medals.

The largest item on display is a dining table with curved ends that can be folded down. The central section of the metal frame has wheels on the bottom of the legs so the table can be moved around easily and takes on a similar appearance to a table-tennis table.

The pieces in the collection are made from wood, marble, ceramic, hand-blown glass or leather, rather than the composite materials usually preferred in sports design.

The gallery is also showing a new piece created by Hayón for Orolog – the watch brand set up by the designer and his business partner Ian Lowe. Called Miko, the watch will be the first in a new series of limited-edition timepieces by Hayón.

The exhibition opened at Galerie Kreo's Paris location on 21 May and will run until 19 September. A version of the same show will be exhibited simultaneously in the gallery's London showroom from 3 June until 29 September.