This kindergarten was designed by Suga Architects Office to make the most of a hemmed-in city plot and features a rooftop vegetable garden, a courtyard playground and a double-height playroom (+ slideshow).

Located on the corner of a city block in Kobe, south-west Japan, the Takeno Nursery spans the full length and width of its 417-square-metre site, allowing enough room for a large private courtyard at the building's centre.

Despite this, local firm Suga Architects Office didn't want to the structure to overwhelm the neighbourhood, so the building height was capped at two storeys and the exterior was "softened" with a timber cladding.

"Because a nursery school is a public building, it is necessary to be mindful of the environmental impact to the neighbourhood," explained project architect Shintaro Fukuhara.

To further break down the mass of the building, sections of the proposed volume were cut away. 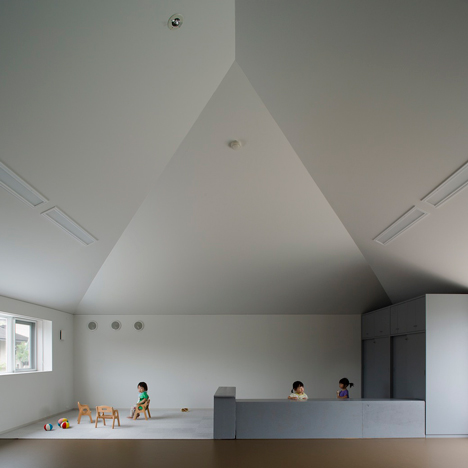 Hakemiya Nursery School is designed to remind children of their homes

This created sheltered spaces for learning and play on the ground floor, as well as a large roof terrace with a vegetable garden running along one side.

"It is a courtyard-shaped plan, so lighting can get effectively from the outside space to the building's centre," said Fukuhara.

"From the road side, the scale feels like that of a one-storey house."

Narrow lengths of treated red cedar run vertically around the external walls, while the majority of surfaces around the courtyard are covered with galvalume cladding – a kind of aluminium and zinc alloy.

The nursery entrance sits within a small recess in the centre of the curved facade. It leads through a small lobby into the courtyard, which features an artificial grass surface and playground equipment.

Activity rooms and a staff office sit on opposite sides of the lobby. The double-height playroom is located just beyond the office with a mezzanine balcony above, and there is also a play area and sand pit sheltered beneath the overhanging roof.

"Children run around in the garden inexhaustibility barefoot," said Fukuhara. "The pilotis can make the playground shaded, defending kindergarteners from severe sunlight in the summer time. In addition, it is possible to play even on a rainy day."

There are two sets of staircases leading up to the first floor, creating a looping route between two extra activity rooms, a kitchen, and the rooftop garden.

"There is not a dead end and the corridor spreading out forever is a way of adventure for children," added Fukuhara. "And because children on the rooftop garden can look down to the road, the atmosphere of the garden reaches outside."

Photography is by Yoshiharu Matsumura.