Furniture that has been extruded and manipulated into distorted forms by Dutch designer Sebastian Brajkovic is on show at the Carpenters Workshop Gallery in Paris (+ slideshow).

The Vanishing Point exhibition features new work by Brajkovic, including chairs and benches that each appear as if they are being sucked into a vortex.

Two benches, named Vanishing Point III and IV, are both pulled outward at one side so their backrests and seats seem to disappear into the floor.

The forms are built from steel tubing that is wrapped in dark upholstery, while the traditional chair frames on the untouched sides are made from patinated bronze.

Brajkovic's aim is to combine historic frame styles with his form manipulations to simultaneously evoke the past and the future.

"I try to make my work as complete as possible, as if trying to give an answer to all problems you might encounter," he told Dezeen. "I do not like work that only points out to a world that looks like it is from the future, as if there is past nor present."

Similar to the benches, the Fibonacci seat looks like a normal dining chair on one side, with the frame and legs supporting the upholstered sections.

However, the backrest and seat on the other side are stretched and warped into a spiral. The distortion in emphasised by the embroidered silk patterns on the upholstery, which are squashed towards the tip of the curved portion that touches the floor. 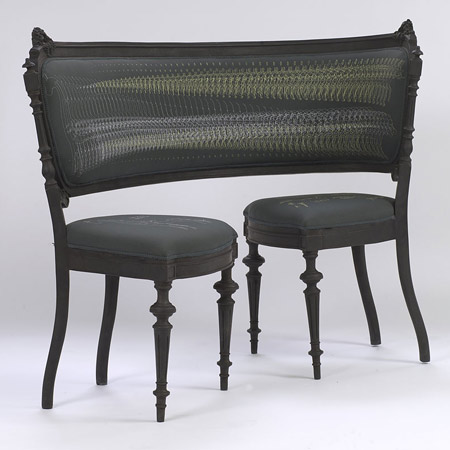 Three seats are combined into the Conversation Piece design, linked by a wavy backrest between a splayed support on each end.

The collection also includes a bench formed form an amalgamation of smaller stools joined at haphazard angles called Sleipnir, sharing its name with the eight-legged horse that was Odin's steed in Norse mythology.

"I like to use found or existing furniture," Brajkovic said. "It is a way for me to celebrate post-world war two modern art. It is a way to try to get close to an idea of the deconstruction of a chair."

Brajkovic told Dezeen that the collection was influenced by the birth of his first child. "This gave me the idea to make pieces that move from a vanishing point and beyond," he said. "For me there is a resemblance of watching a baby being born and a vanishing point."

The exhibition also includes a series of aluminium tables called Lathe, which are shaped on a computer-controlled turning machine to include small ridges that circle the entirety of the surfaces. The pieces are then hardened and coloured in an anodising bath.