Prefabricated modules of cross-laminated timber were "plugged in like Lego pieces" to build this eight-storey apartment block in Finland – one of the first examples of its type in the world (+ slideshow).

Named Puukuokka, the building was designed by Finnish studio OOPEAA for housing developer Lakea Oy. According to architect and studio founder Anssi Lassila, it is the tallest wooden apartment block in the country and one of the first high-rise examples of prefabricated cross-laminated timber (CLT) construction in the world.

"The use of prefabricated modular building components is nothing new in itself," he told Dezeen. "However, the use of CLT is new, and so is its application to multi-storey buildings of this height."

CLT is an engineered wood formed by glueing together several layers of lumber at right-angles to each other, making it much stronger and more rigid than normal wood. Manufacturer Stora Enso took advantage of these properties to develop a modular building system using only this material.

These lightweight modules provide the building's main structural framework. Compared with typical concrete constructions, they can be installed in half the time, with far fewer delays caused by weather. 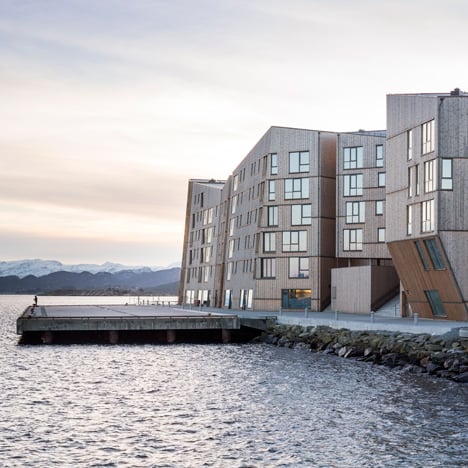 "The idea to use this kind of system came from the client," said Lassila. "At that time, Stora Enso was developing a system made of CLT and I got excited about the opportunity to be involved in developing something that helps to create high-quality architecture through mass production."

"The prefabricated modular CLT structure makes it possible to keep the construction time on site to a minimum because all the modules come with fully finished interior surfaces and they are fully prepared with fittings and ready for installation," Lassila added.

"The time on site was only six months, and the carbon footprint of the wooden structure is significantly less than that of a building made of concrete."

Fire regulations had previously prohibited buildings of this height being constructed from wood. But a change in Finland's building code in 2010 – largely prompted by the high fire-resistance of CLT – has now made it possible to build an eight-storey block with a wooden frame, as long as this load-bearing structure is coated and an automated sprinkler system is fitted.

"Wood is a very good building material for many different types of buildings and I don't think that we have yet seen its full potential," said Lassila. "It has been estimated that, when realised in accordance with these regulations, a wooden apartment building is 50 times more fire safe than a similar apartment building made of concrete."

The building is located in the Jyväskylä suburb of Kuokkala, and is the first of three structures planned for the site. The other two are set to be completed in the next two years, creating a total of 150 apartments.

The exterior of the building is also wooden – larch panels clad both the front and rear of the building. The side facing the road has been painted black, while the courtyard-facing rear facade has been left untreated and is covered in balconies.

Inside, spacious hallways run through the centre of the plan and staircases are positioned in the middle. There are also full-height spaces at the ends to help the interior feel brighter and more open.

Homes include a mix of studio flats, and one- and two-bedroom apartments. Every flat has its own sauna and a balcony.

"The atmosphere in the building is special," said Lassila. "It is radically different from what we are used to experiencing in a regular apartment building. Wood as a material is pleasantly present in the hallways as well as in the apartments themselves."

Puukuokka also pilots a new financing model for homebuyers – after renting a flat for 20 years, the occupant becomes the owner. The only requirement is a seven per cent down payment before moving in, and the rest of the cost is covered by a state-guaranteed bank loan.

Photography is by Mikko Auerniitty.