The building was formerly a house, but has been converted into a cultural venue where guests are invited to prepare and eat a traditional Vietnamese meal together before settling down for the night.

"The owner works in travel and tourism," explained Block Architects.

"He once rented the house and planned to renovate it into a cultural place. It is on this spot that people meet up, share and cook Vietnamese traditional food, especially vegan food."

Now named Vegan House, the three-storey building is located in Ho Chi Minh City's District 3 – the quieter and more scenic of the Vietnamese city's two central zones. It is very narrow, and is sandwiched between two adjoining buildings.

To help the building to stand out, project architect Duc Hoa Dang chose to give it a more noticeable identity by re-cladding large areas of the facade in louvred shutters and painting them in a variety of vibrant colours.

These shutters – known as jalousie windows – are common throughout Southeast Asia. But arranged in this way, they create a flexible surface that allows occupants to bring in as much or as little daylight and ventilation as they choose.

"[The aim was] to exploit these old things, and add available ones and new ones to create a fresher place that still keeps the traditional values of the former house," said Block Architects. 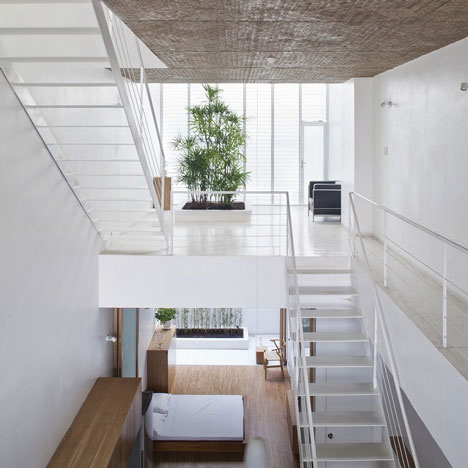 "These windows have been used in Vietnam for a long time because of ventilation. They are now rearranged into a new facade and create a special attraction, as well as harmonising with the ancientness of the entire area."

Across the roof, some of the shutters need to be kept open to allow space for the branches of trees growing up from a series of terraces at the centre of the building.

More colourful shutters can be found around the edges of the ground-floor courtyard, as Dang has used them to create flexible partitions between rooms. His aim was to "separate and decorate" space.

Surfaces and furniture inside the house present of mixture of styles, colours and patterns. This is because the client's friends donated many of the items, and numerous surfaces were left as they were before.

The ground floor is taken up by cooking and dining areas, anchored by a counter that runs through the centre.

The first floor is a dorm-style bedroom with four beds and a bathroom, while a master bedroom occupies the uppermost level.

This top storey was formerly an unused roof, so a new steel staircase had to be added to provide access. Steel sheeting provides a new roof for the space. There is also a small balcony at one end for "drinking tea and looking at the night sky".

"Unrefined cement surfaces, jalousie windows and bamboo wattle on the ceiling create both a modern and ancient place, and revive Vietnamese architecture of the 60s and 70s," added the studio.

"As time goes by, people here will give new vitality and new soul to this house."

The 60-square-metre Vegan House is typical of the narrow "tube houses" that feature in many Vietnamese cities. Others to have undergone modernisation include a residence that now features a vertical garden on its facade and a home with a see-through exterior.