Movie: leading designers and architects including Michael Young and David Adjaye talk about their participation in Clerkenwell Design Week 2015 in this movie produced by Dezeen for the festival.

Clerkenwell Design Week is an annual event consisting of exhibitions, talks and temporary installations across the Clerkenwell area in London, home to a host of architecture firms and nearly 100 showrooms.

"Clerkenwell Design Week is a three day celebration of one of Europe's most important creative hubs," show director William Knight says in the movie. 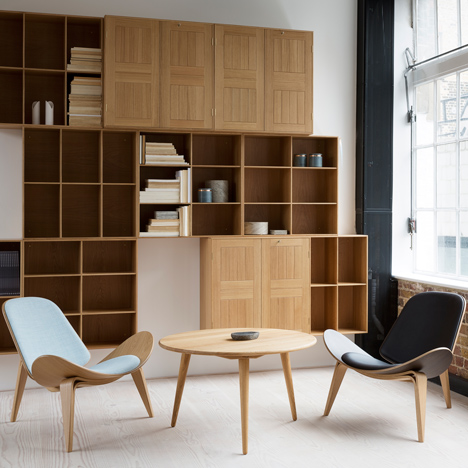 "The foundations on which Clerkenwell Design Week are based are the showrooms. They're an essential part of what makes Clerkenwell a creative destination."

The chair is called <5_MY, a reference to how light it is, and will be manufactured in factories that normally produce carbon-fibre bicycles.

"The chair is called 'Less Than Five' because it weighs less than five pounds," Young explains. "It's very light, good for shipping and easy to carry."

Architect David Adjaye also presented his new chair for Italian brand Moroso at the festival, which he designed for his Aishti Foundation project currently under construction in Beirut, Lebanon.

"I wanted a chair that didn't look like production furniture that had been ordered in," he says.

In addition to the showrooms, Clerkenwell Design Week features a number of exhibitions situated in historic buildings around the area.

The festival introduced a new venue this year called Old Sessions House, an eighteenth-century courthouse that hosted products by a range of international design brands as part of Icon's House of Culture.

"This was a unique opportunity to bring the brand to London and show the complete collection in such an historical environment," says Jacob Gubi, chief creative officer of Copenhagen-based brand Gubi, which was exhibiting at Clerkenwell Design Week for the first time.

Gubi, which produces Robert Dudley Best's iconic Bestlite lamp as well as new products by contemporary designers, took over a whole room at Old Sessions House to show their collection.

"It's been such a pleasure to be part of the venue," Gubi says. "It's been a unique experience, so we will for sure be back next year."

Each year, Clerkenwell Design Week commissions a range of installations, in which manufactures team up with young architects or designers.

Installations this year included a steam-bent wood installation by designer Sebastian Cox, pastel-coloured street furniture by Swiss studio GRUPPE as well as a pavilion by Cousins & Cousins architects made from glass manufactured by GX Glass.

"We had the inspiration from glass venetian sweets, because when I looked through the entire [GX Glass] product range there were so many colours," Cousins & Cousins co-founder Jelena Cousins explains.

"I wanted to explore all the different types and colours and create an object that you walk through. So you're walking through a glass sweet."

2015 was a record year for Clerkenwell Design Week, Knight claims.

"This year has been a huge success," he says. 'We've seen record numbers visiting the exhibitions, showrooms, participating in talks, interacting with the installations. We're really looking to taking Clerkenwell Design Week forward in 2016."

This movie was produced by Dezeen for Clerkenwell Design Week. The music featured is a track called It's Not The First Time by UK house producer Just Ben.

Still photography used in the story is by Sophie Mutevelian, unless otherwise stated.