Design Miami/Basel 2015: British designer Max Lamb has created a bathroom suite for Dzek from speckled synthetic marble and installed the products in a space lined with the same material.

For Design Miami/Basel 2015, he has created a bathroom with a black version of Dzek's Marmoreal material used for the previous project, which is patterned with colourful speckles. 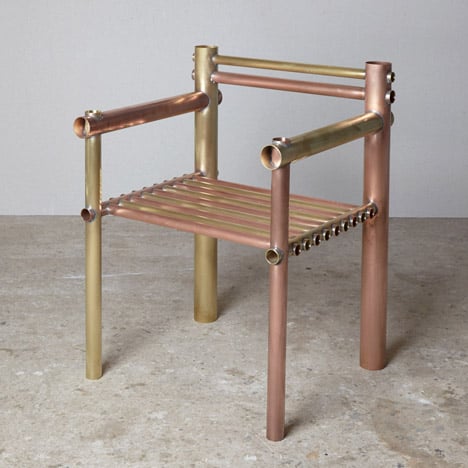 A toilet, a bath, a sink and several storage units are all formed from flat slabs of the artificial stone – a composite pre-cast material similar to terrazzo, which is made from marble aggregate combined with a polyester binder.

"With the Marmoreal material as protagonist, each of his bathroom furnishings became necessarily different from the familiar standards made out of ceramic, steel, and plastic," said a statement from Dzek. "Stone, of course, offers both limitations and opportunities."

These elements are installed within a three-sided booth where the material also covers the floor and extends part of the way up the walls, partially camouflaging the products.

Referencing the Modernist attitudes towards bathroom design of architects Le Corbusier and Charlotte Perriand, as well as his own Asian-influenced daily bathing routine, Lamb aimed to create a set of standardised sanitary ware with generous proportions.

For example, the Marmoreal bathtub has steep vertical sides similar to the traditional Japanese ofuro – or soaking tub.

The installation also includes a toilet with a separate raised cistern and a sink positioned below a mirrored cabinet. All of the bathroom fittings are provided by UK brand Barber Wilsons & Co.

A set of furniture built from the same flat slabs also accompanies the bathroom suite. One of the chairs created from the white version of the material is also included in the booth to offer a comparison.

"They are efficient, and designed to serve equally well in a fully integrated Marmoreal space as well as in ad-hoc scenarios," said Dzek.

The installation is on show at the Messe Basel exhibition centre for Design Miami/Basel 2015, which runs from 16 to 21 June. A inhabitable sculpture by Atelier van Lieshout and an updated version of a flatpack house by Jean Prouvé are among other projects at the event.

Lamb frequently experiments with unusual surfaces and textures when creating furniture. This was demonstrated in Milan earlier this year, when the designer held an exhibition that contained 42 of his seat designs made using a wide variety of materials and processes.