New Zealand studio Designtree has added a corner module to its flat-pack Frankie lighting system, enabling a range of new configurations including X shapes and loops.

Extension panels and additional arms elongate the shade so it can house multiple bulbs. Launched this year, the new corner module introduces the possibility of 90-degree bends into the system.

"This new module addition opens up a whole new arena of possibilities – it is a whole new thing," Designtree's Tim Wigmore told Dezeen.

All three Frankie Pendant modules can be mixed and matched to create L- or X-shaped lamps in a variety of sizes. 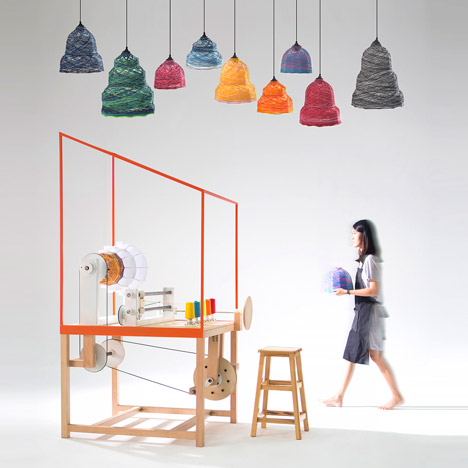 The Frankie Torus is one of the many configurations that the new module allows and is created by combining four corner pieces.

Adding the Frankie pendant extension module allows the Torus shape to be extended in 500-millimetre increments to make square and rectangular pendants of different lengths and widths.

The felt panels and textile-covered lighting cables are available in a range of colours to coordinate with room schemes.

The Frankie system is made from felt to provide sound absorption, particularly in open-plan office spaces. Similar designs such as the Hood modular lamp shades by Form Us With Love also use the material to help dampen acoustics in large, echo-prone spaces.