An iPad controls the perforated shutters that concertina across the glass facade of this house in Linz, Austria, allowing its two software engineer residents to reveal or conceal views of the city (+ slideshow).

Architects Andreas Dworschak and Wolfgang Mühlbachler of local studio Archinauten designed House GT for the couple and their young children on a sloping plot overlooking Linz – the third-largest city in Austria and the home of the annual Ars Electronica Festival for digital art and technology.

A fully glazed facade was added to allow residents to appreciate the views. But this also created a privacy issue, so the architects devised a series of perforated shutters that can be controlled electronically via an iPad.

Arranged in two rows, these hinged shutters concertina across the large expanses of glazing on the two upper storeys to screen the family's living spaces.

"The complete south facade is covered by an intelligent and electrically driven shading system, which works as a filtering layer that regulates the amount of sunlight and openness," explained the architects. 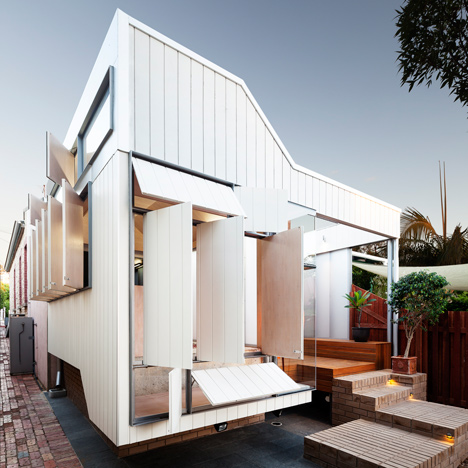 "The shading system of perforated steel folding elements, reacts to the needs of the user and highly influences the appearance of the facade."

Small circular perforations in the steel shutters are intended to reference the dappled patterns of light and shade cast by the foliage of trees. When the shutters are closed the small perforations artificially recreate this effect on the interior.

"The pattern loosely refers to the shadow that trees and leaves would cause on a facade surface," Archinauten's Valerie Kerz told Dezeen.

"Together with the remaining trees and bushes we tried to double the effect of the shadows – we like the effect that some shadows move with the wind and others do not."

The pattern is carried on to the black MDF panels that line the interior walls, as well as an elevator shaft that connects all four floors of the building.

One wall of the lift is covered in artificial grass, which the architects said helps to compensate for it being the only space in the house without a view.

The house's two lower floors are partially submerged. The terrazzo-covered lobby, which is concealed beneath a sloping lawn at the front of the house, contains a closet area, bathroom and parking spaces for visitors.

The two software engineers work from home, so an office is located on the first floor, along with utility spaces. This storey is slightly recessed from the rest of the facade and partly masked by the angle of the lawn.

A line of high-level windows provides a source of daylight for the partially submerged floor.

Three bedrooms sit behind the glass facade on the second floor. A narrow staircase leads from here to an elevated garden on the hillside.

The living room and kitchen are contained with a glass penthouse on the upper floor, which also links with the garden to the rear.

"Like a pavilion the living space lays on top of the building – transparency dominates the space – especially towards the cut-out garden," Kerz told Dezeen.

Floors throughout the house are either speckled terrazzo or oak floorboards.

The architects also designed a sauna and a pool house for the garden of the property, which could be realised in a second phase of the project.

Photography is by Kurt Hörbst.