Design graduate Jordi Iranzo has created a storage system for small living areas that is suspended from the ceiling so it doesn't take up any floor or wall space.

Iranzo, who studied at the Burg Giebichenstein University of Art and Design in Germany, created the Dalt system to make the most of the scarce space in increasingly small city homes.

Last year furniture giant Ikea released a 51-piece collection with a similar premise, based on research suggesting that one-in-five urban dwellers now lives in a space smaller than 30 square metres.

"This project is designed for people who need more space," Iranzo told Dezeen. "Nowadays, space is one of the most valuable things we have."

Dalt comprises four ceiling-storage objects, including a white steel clothes rack and a laundry sack made of a steel ring and suspended leather 'net'.

There's also a circular welded-steel basket that could be used as a floating bedside table or to keep food in, and a rectangular basket, which could store anything from office supplies to sports equipment. 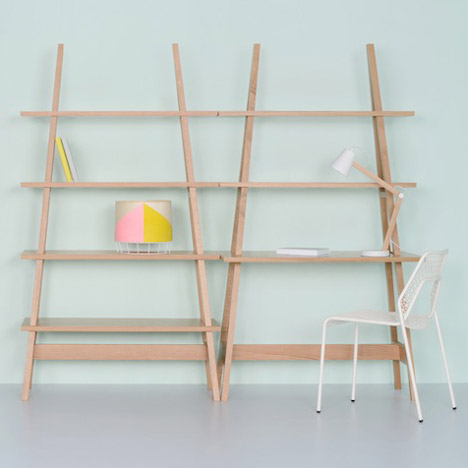 For stability, each object is suspended at four points from a laser-cut pulley-system, enabling it to be drawn down for use and then lifted out of the way afterwards.

"After I saw these amazing pictures, I was a little bit in shock. How can a person or a family live in these small apartments?" said Iranzo, who then started looking into space-saving solutions.

He realised that while many designers had utilised floors and walls – even putting storage below floors and inside walls – few had made use of the ceiling, despite it offering the same footprint as the floor.

Iranzo aims to build on his collection of four items to find more applications for his "simple concept that people can use in many different situations".

Innovative storage solutions for space-poor city dwellers are becoming an increasingly popular subject for both young designers and commercial companies. Last year British retailer Heal's released a line of furniture aimed at this market, following on from Ikea's PS 2014 collection.

Photography is by Thomas Lewandowski.