These art and design studios, featuring steeply pitched roofs and cement-panel cladding, have been added by New York studio MOS Architects to a college campus in Skive, Denmark (+ slideshow).

Situated on the edge of the town that faces the Skive fjord, Krabbesholm Højskole is one of Denmark's oldest and largest colleges, focusing particularly on preparing students for applying to art school.

MOS Architects – who won this year's Cooper Hewitt award for architecture – was asked to add new studios for the art, architecture, graphic design and photography courses, but to create the sense of a campus rather than a collection of separate buildings.

The studios are arranged around a triangular courtyard and feature large window walls, allowing students to see what's going on in the other buildings.

"The arrangement aims to densify the previously sparse campus," architects Hilary Sample and Michael Meredith told Dezeen, "and create moments of intensity through the proximity of the various buildings and exterior spaces to each other." 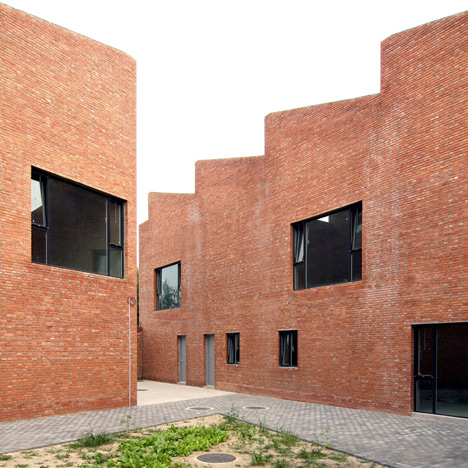 Elongated, open-plan layouts ensure uninterrupted views from one end of the site to the other, and glazed end walls extend the sight lines towards the rest of the campus.

Communal porches are created at the points where the various structures meet, sheltered beneath overhanging sections of the roof. Casual seating in these spaces can be used for informal study or socialising.

"Instances of social interaction and experimentation are critical to the school's educational ethos," the architects added. "It just means that all students are closer together, looking at each other's work and ideas."

The exaggerated pitched roofs were influenced by the region's traditional architecture and evoke some of the historic buildings on the campus, including one from 1565.

In practical terms, the sloping profiles help prevent snow piling up in winter.

Internally, the steep roofs result in high ceilings that enhance the sense of space and light within the studios.

Mezzanine floors were added to accommodate services and keep the floor as clear as possible, but are sometimes used by the students during events and installations.

Cement panels applied across the walls and roofs give the structures a homogenous aesthetic that references the industrial concrete-walled buildings found elsewhere on the campus.

Sample and Meredith founded MOS Architects in 2005. They are best known for the thatched, conical towers they created in the MoMA PS1 courtyard in 2009, but have also developed a series of unusual house designs.

Photography by Florian Holzherr and Per Anderson