A brick water tower now stands at the entrance to this 1980s bungalow in Santa Fe, Argentina, which has been remodelled and extended by local firm Biagioni Pecorari Arquitectos (+ slideshow).

Named House in El Pinar, the building is the home of a couple, one of whom has two children who visit on weekends.

They asked Biagioni Pecorari Arquitectos to give the structure a much-needed facelift, and to create a new bedroom, bathroom and kitchen.

Elements of the previous mock-Mediterranean exterior were stripped back, including a curved parapet at the front and brick arches at the side, while the 54-square-metre extension was added at the rear.

"The house wasn't solid enough to build upstairs, so the project had to cleverly use the existing space on the ground floor to create new areas," architect Gabriel Biagioni told Dezeen.

Larger windows were added and the exterior walls were re-plastered. But the most noticeable new feature is the brick tower at the front, which has storage space in its base and a water tank above.

The six-metre-high tower provides a vertical counterpoint to the otherwise low-rise structure, which has walls with a height of just 2.7 metres.

"It seemed interesting to add this vertical structure as a contrast to the horizontal house," explained Biagioni, adding that he chose brick to reinforce this contrast. 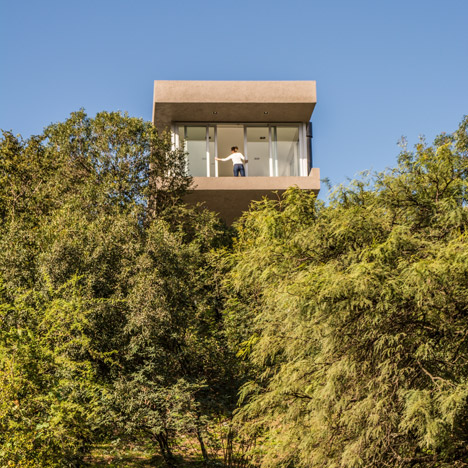 Casa 367 sits above the treetops of a hillside in Argentina

"We wanted to use a different material, and brick was the best choice as it relates to our local construction," he said.

A new paved area and pool were added behind the house. These are traversed by a beam that doubles as a gutter, extending from the house to a small drain at the back.

"As well as carrying water away from the house, the beam has a spatial function – we wanted to integrate the yard and the pool with the house and avoid the use of columns," explained Biagioni.

The house was originally built in the 1980s and is divided into two wings, separated by a carport in the middle.

The smaller wing remains largely unchanged, with a guest bedroom that can double as a study, a bathroom, laundry room, and a new outdoor clothes-drying area enclosed by a fence next to the water tower.

The larger wing, which was extended, contains three bedrooms and two bathrooms along the edge of the house, and a kitchen, dining room and living space along the other side. An internal wall was removed to allow the three spaces to flow as one.

Brick and eucalyptus wood – which was chosen for its colour and lack of woodgrain – were added to the exterior to help break down the mass of the white plastered walls.

Inside, recycled pinotea wood was chosen for the flooring. Bricks were also used internally, for the kitchen island and to enclose the audio-visual equipment in the living space.

"We usually think about diluting the inside-outside separation through the continuation of walls and materials inside, as Frank Lloyd Wright and Richard Neutra did," said Biagioni.

The house now has an area of 176 square metres. Construction took six months, and Biagioni said the finished result offers a lesson in the value of taking away.

"This project shows how apparently worthless construction can have hidden potential to become a functional, well-organised space," he added.

"Sometimes there is no need for complicated design to make this happen."