Graduate shows 2015: don't trust someone else to permanently mark your skin? This device by Royal College of Art graduate Jakub Pollág is designed to allow users to self-administer tattoos (+ movie).

Pollág created the Personal Tattoo Machine to allow other enthusiasts to create indelible marks on their body associated with memories and meanings, rather than perfect imagery.

"Personal Tattoo Machine democratises the tattoo industry," he said. "It puts a tool used only by a limited group of people into the hands of enthusiasts, who are seeking an alternative and unique way to permanently mark their meaningful memories onto their skin."

Some of Pollág's own "homemade" tattoos were applied with the low-tech method of poking himself with an ink-loaded sterile needle. Although he appreciates the "raw" quality of these designs and the stories behind them, he wanted to develop a technique that was less time-consuming.

Influenced by the ad-hoc tattooing techniques used by prisoners, Pollág built a device that he intends as a "quality tool that is safe and easy to use" by the artist rather than a second party.

"There is a missing link from the idea that you have in your head – what kind of tattoo you want – to execution done by someone else," the designer told Dezeen. 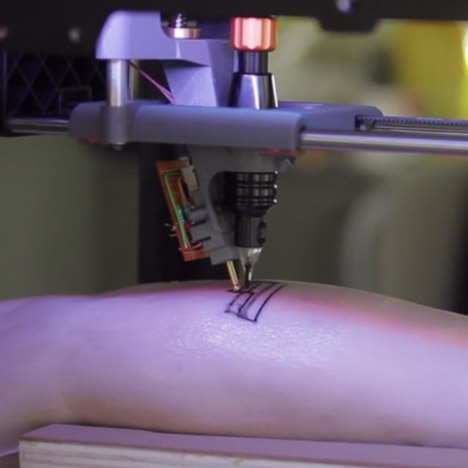 Running on a nine-volt battery, a small direct-current (DC) motor inside the machine drives a component that turns the spinning motion into an up-and-down pulse for the needle.

The sterile tubes and needles for carrying and administering the ink are outsourced.

Pollág purposefully omitted the different thickness options found on professional machines, and set the speed to be slower so novices can focus on their drawing.

"I wanted to create a product that will again focus on tattoos that are more about the meaning," he said.

Pollág's first prototypes were made from metal, but he quickly moved into 3D printing for later models to simulate the injection-moulded plastic that would be used in commercial production.

He also designed packaging that integrates all the equipment needed during and after using the machine, including instructions, rubber gloves, an ink cup and antiseptic lotion.

To date, the machine has been used to create 30 tattoos on 20 different subjects. However, Pollág still recommends visiting a professional parlour for more accurate results.

"This machine is not aiming to replace tattoo parlours," he said. "It's there to offer a more personal option. If you want a realistic portrait of your, let's say, cat, you should still go to a tattoo parlour and not use this machine."

Pollág is presenting the project at this year's Show RCA graduate exhibition in London until 5 July, where other devices on display include a "power glove" for carving hard materials by hand and a tactile interface for navigating CAD environments.

Improvised tattooing is also possible with Appropriate Audiences' device, which combines a 3D printer with a tattooist's needle to form an automated tattoo "printer".