Thirty-six slender columns support the thin concrete canopy of this colonnade, which provides an outdoor events space for a house museum on Mexico's Yucatán Peninsula (+ slideshow).

The permanent pavilion structure was intended to take the place of the canvas tents typically used to host the museum's events.

"The client sought a permanent structure to hold all kinds of scales of events and to enhance a more intimate relationship with the existing building," explained the studio, which is led by Mexican architect Gustavo Carmona and Puerto Rican architect Lisa Beltran.

"The columns relate to the trees that surround the property and the balconies of the house," they added. 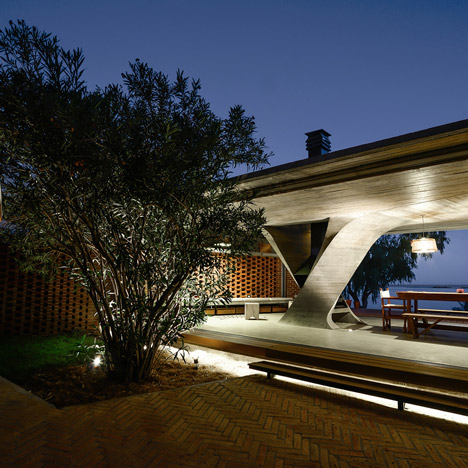 "The roof reinforces the presence of the emptied space below, contrasting with the solid nature of the house and connecting with the garden to its sides."

The pavilion creates a U-shaped promenade, located at the base of a sweeping staircase with ornamental balustrades.

It was built from white concrete, chosen for its similarity in colour to the facade of the old house.

"The light colour resonates with the character of the city and the house and allows light and shadow to mark the passage of the sun on its surfaces," said the architects.

Seams in the cast-concrete panels that make up the slender "knife-edge" canopy highlight its construction method, but at the same time mimic grooves in the museum's facade and the gaps between the paving slabs below.

The canopy is topped by a steel structure that will stabilise the structure in the event of a hurricane.

A canopy contained within this structure can be drawn across the roof of the pavilion to shelter the centre of the courtyard.