This pair of gabled homes in Winchester, England, are described by architect Adam Knibb as "contemporary timber pods on top of a dark monolithic base" (+ slideshow).

The semi-detached Cedar Lodges are located on a plot previously occupied by a dilapidated garage.

Knibb, who is based locally, was asked by a developer to create a pair of modern homes that respect the visual style of the neighbouring buildings, but also avoid looking directly into a house across the street.

"The developer didn't have a particular specification in mind about what type of house it should be, which was good because it allowed us to think quite dramatically about what we could put into the area to enhance it," Knibb told Dezeen.

The project team worked closely with the developers and local planners to create a building they felt could become a case study promoting contemporary architecture in the area. 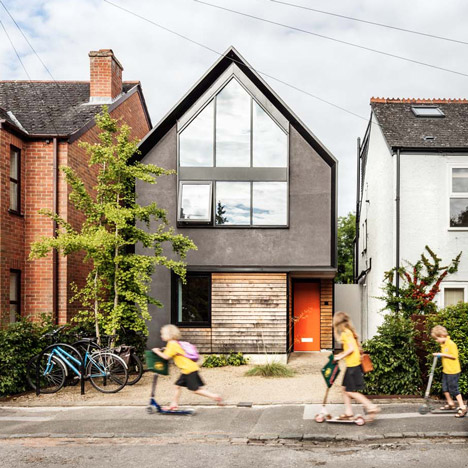 The typical terraced properties in the neighbourhood feature narrow frontages and a main volume that extends away from the street. The architects replicated this format, so the building's impact on the street is reduced.

The two houses occupy the entire depth of their relatively narrow plot, with outdoor spaces incorporated at the sides rather than the front or back. These take the form of small gardens and decked areas accessed through the kitchens.

Parking and the main entrances are integrated in a podium at street level, which is painted a dark shade that continues the tone of the other elements connecting the houses with the street.

"These contemporary timber pods sit on top of the dark monolithic base," said Knibb, "so it looks as if it's rising out of the ground and there's this lightweight timber structure clipped onto it."

The site is tucked into the side of a tree-lined hill, which informed the decision to clad the majority of the facades in timber.

"We wanted to mimic the trees behind so we used cedar that will turn silver over time, and oriented it vertically so it will blend in with the background," Knibb added.

A distinct datum is formed by the junction between the podium and the wood-clad units, as well as the line where the timber cladding meets the roof. Recessed downpipes between the houses help to separate the forms and give each property a clear identity.

The topography of the street means there is a drop in the level towards the opposite side, so the architects introduced trinagles of glazing below the roof that reduce the visual mass, but also prevent views down into the house opposite.

"The glazed apexes still allow views to the sky without overlooking," Knibb explained.

"We also worked very hard at keeping the roof form really thin, with most of the structure behind the glass so it appears as a folded form over the top of the two timber-clad elements."

The majority of openings are positioned in the side elevations to ensure privacy to the internal spaces. In the rear bedrooms, angled windows projecting from the facade provide natural light and controlled views.

The main living areas feature an open-plan layout that helps to maximise natural light, while carefully positioned skylights illuminate the bathrooms and stairwells.