This beachside cafe and toilet block by French studio Link Architectes is built into a grassy bank by the Loire River near Saint-Étienne, France (+ slideshow).

The Saint-Victor-sur-Loire Leisure and Services Centre is located beside a popular beach outside the city, close to to an inland port on the Loire River.

Link Architectes was tasked with creating the simple structure as part of a wider refurbishment of the beach landscape.

"At first, the client expected a series of facilities aligned in front of the beach, like a building with only one facade," the architects told Dezeen. "But as it is at the centre of the site, we felt it was important to make the building work in every direction – the front, the sides, and the roof."

To achieve this, the building was embedded into a hill overlooking the beach, while grass was extended onto the roof to create a viewing platform – a similar strategy was used by THE Architectes to partially disguise a seaside water-sports building in Saint-Hilaire-de-Riezon on the west coast of the country. 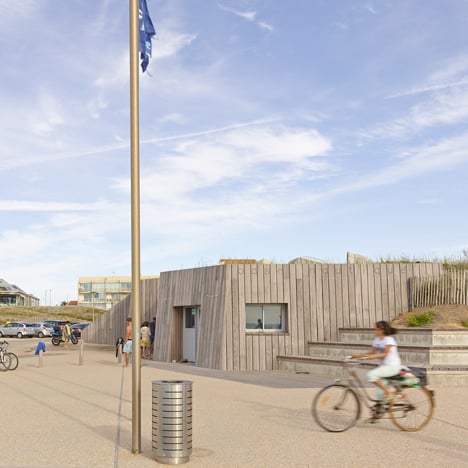 THE Architectes conceals nautical sports base under a grassy beach dune

The snack shops and ticket office were added at either edge of the Saint-Victor-sur-Loire building to open up to the front and sides.

"It was important for us that the building felt anchored on the ground, and not just put on top of it – like it has grown from the beautiful landscape surrounding it," said the architects. "We wanted it to be more than just two cafes, an office, and two toilets."

The front of the 210-square-metre building faces west and features three voids cut symmetrically across its width.

The first provides space for a snack bar, the second provides a sheltered meeting spot for walking groups and other visitors, and the third provides a covered area for cafe seating. The solid sections between these voids house the toilets and ticket office.

"We used a balance between voids and mass to give the building a quiet quality with almost with classical proportions, which creates a certain kind of rhythm across the facade," said the architects.

"This interaction between open and closed elements is also designed to make the building work on two levels," they added.

"The main concrete structure provides a solid shelter anchored in the ground, and the wooden elements open and close to create spaces that interact with people, which makes the building feel more usable."

The only element that breaks the symmetry of the facade is a large glazed entrance for the ticket office.

"It appears as a separate element within the whole composition to make its presence clearer," said the architects. "It was part of the brief to make all the functions very visible."

As well as providing services and shelter, the building was designed to ease the visual transition from the car park at the entrance to the beach and esplanade on the other side.

"At the early stages of the project, we made the client realise that despite its small size, this building had the potential to act as a threshold for the entire site," said the architects.

"The roof has become an inhabited space providing a viewing platform, the facade is open and porous, so it feels more like an extension of the plaza in front of it, and the building leads seamlessly on to the beachfront esplanade."

Larch plywood was used for all the timber elements of the building to give them a uniform appearance, and the concrete exterior was painted white to unite it visually with an older rescue centre in front.

"The white walls establish a dialogue, so that the new building, the old building and the plaza as a whole act as a threshold for the entire place," added the team.

Other waterside amenity buildings recently published on Dezeen include three curved toilet and shower blocks designed as part of an effort to rejuvenate a Sydney beachfront and a steel-framed pergola covered in willow reeds for a seaside sailing school in Cádiz, Spain.

Photography is by François Maisonnasse.