This water-sports facilities building by THE Architectes has been built into the side of a grassy dune to minimise its visual impact on the coastline (+ slideshow).

The one-storey nautical base in Saint-Hilaire-de-Riez, France, was designed by Paris studio THE Architectes with a reinforced concrete structure and a turf roof that conceals the bulk of the building. 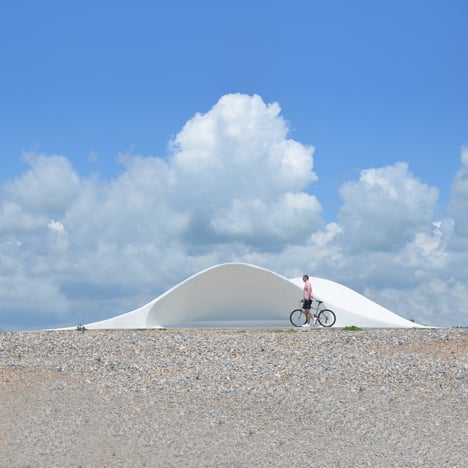 "This nautical base is situated in the midst of an exceptional landscape – next to the coast, nestled between pristine dunes, and close to a rocky cliff," said the design team.

"To install sports facilities ever so discreetly in the heart of this eco-sensitive site, it is hidden in the existing dune," they explained.

Just the north facade of the building shows above ground. Clad in planks of azobé – an African hardwood chosen for its resilience – it faces out onto a promenade and the sea beyond.

"The reception areas, offices and activity spaces are placed along this facade to take advantage of exterior views," said Juhel.

Seven sets of doors provide direct access from the seafront to a public toilet, storage spaces and reception, as well as to the separate wet and dry equipment stores and changing facilities at the back of the building.

A set of square skylights channel light into the hallways and backrooms of the building.

On the exterior, the translucent domes and timber-clad shafts of the light wells peak just above the surface of the dune.

Following the slope of the dune, the cladding connects with a low wall that borders a pathway around the perimeter.

"The exterior treatment creates continuity with the existing retaining wall elements of the dune by the use of azobé planks," added the team.

A small decking and stepped seating area attached to the western side of the building helps to blend the structure into the dune.

Subtle placement of signage on one side of the facade sees individual characters spaced plank-width apart.

Photography is by Stéphane Chalmeau.