Polymer yarns are fed into automated machines, which can be programmed to weave various patterns that enable flexibility and rigidity in the desired areas of the shoe. The section around the ankle is more flexible to allow the wearer to insert and remove their foot, while the toe, heel and bridge are rigid for support.

Different colours and motifs can also be incorporated into the weave.

Knitted flat, the material is sewn together into slipper-like shoes that are fitted into 3D-printed soles.

Before assembly, the toe and heel are heat-pressed in a mould for added rigidity, while laser engraving enables smaller areas to be hardened more accurately. 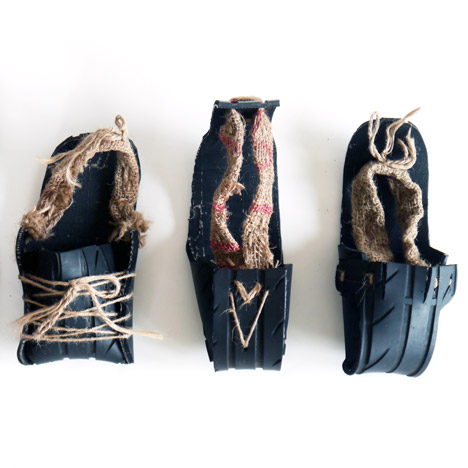 Liao, who studied on the RCA's Innovation Design Engineering course, wanted to create shoes that are environmentally friendly and easy to recycle.

Rather that using the multitude of man-made plastic composites that go into current trainer production, which makes them difficult and expensive to recycle, his design takes its cues from nature.

"Nature uses only a few polymers for everything in our living environment, because it changes the material's identity, structures and textures," he said.

The result is his Bio-Knit fabric, which is made from a single polymer and can therefore be recycled as a whole.

"This multi-functional single material can efficiently boost our recycling industry without relying on a separation process," Liao told Dezeen.

He believes this could lead to the conservation of natural resources, improvements to the sustainability of landfill, reductions in energy and greenhouse gases, and reduced costs of recycling.

Liao's project was presented at this year's Show RCA 2015 graduate exhibition in London earlier this summer, along with a series of stools made using waste nylon powder from 3D printing, and a new material formed from plant fibres and naturally fermented cellulose.

Sportswear giants Nike and Adidas also use knitting technology to create footwear. Nike's Flyknit has been used to create running trainers, football boots and basketball shoes, and swiftly launched a soccer boot after Adidas claimed to be the first to produce one with an upper knitted entirely from yarn.

Adidas also recently added to its eco-credentials by unveiling a pair of trainers made from recycled ocean plastic.