The Kaeng Krachan Elephant Park at Zoo Zurich offers six times as much room as the previous enclosure, creating an environment where the mammals can roam freely between indoor and outdoor spaces, while also making it easier for visitors to observe the animals.

Markus Schietsch Architekten collaborated with landscape firm Lorenz Eugster and engineering office Walt + Galmarini on the project, creating a compound that can accommodate up to 10 elephants at a time.

The building's most prominent feature is its domed wooden roof, which has an area of 6,800 square metres. It is interspersed with 271 ETFE plastic skylights – all in different shapes and sizes – to create the impression of tree branches.

"The roof dissolves into a transparent maze-like structure that establishes an organic relationship to the surrounding forest," said the architects in a project text. 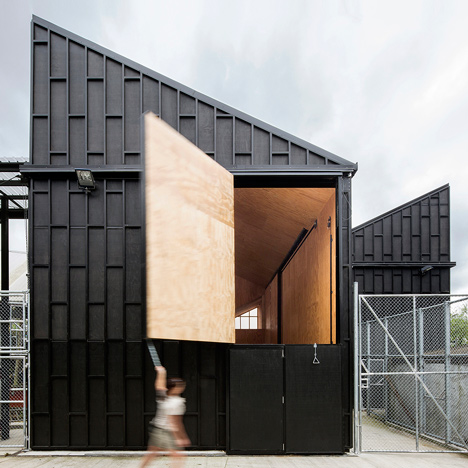 "In the interior, the roof unfolds its atmospheric effect – as if through a canopy of trees, the sunlight filters through the intricate roof structure, generating constantly changing light atmospheres."

The roof was constructed from prefabricated triple-layer panels, which were assembled flat on site and then bent to create the domed form – known as a gridshell. Built, the structure has a wavy profile that lifts up at certain spots to reveal glazed wall sections.

"The continuously changing facade structure consists of lamellas that seemingly grow up to the edge of the roof as an organically shaped band, indicating the load-bearing areas," said the team. "The iconographic shell of the roof, together with the dynamic facade, form an atmospheric envelope concentrating the essence of the design into a symbiosis between architecture and landscape."

The 11,000-square-metre complex boasts several different watering holes, allowing elephants to swim and bathe. There is also a pool with a glass wall, providing an underwater viewpoint for visitors to observe the animals swimming from a more unusual angle.

This gives the animals more freedom to develop their social relationships and ensures greater security for the animal keepers, according to Zoo Zurich.

Six elephants moved into the Zoo Zurich enclosure in mid-March to allow them to get used to their new environment, ahead of the opening in June. Unlike the previous compound, the new elephant house allows "protected contact," which means that keepers are never in the same room as the animals.

The Kaeng Krachan Elephant Park takes its name from a national park in Thailand, where the zoo supports a project to help protect Asiatic elephants from conflict with farmers over damage to plantations.

A number of zoos have been redesigning their animal enclosures in response to growing information about the needs of different species, creating areas that offer more stimulation and space. Examples include the glass-domed elephant house at Copenhagen Zoo by Foster + Partners and a giraffe house with thatched walls at Rotterdam Zoo.

Last year, Bjarke Ingels' firm BIG unveiled Zootopia – a vision for the future of Denmark's Givskud Zoo where animals and humans "co-exist", with buildings disguised by the landscaping of the site.

Photography is by Andreas Buschmann unless specified otherwise.